iOS app will warn fanbois of attacks, fandroids not so lucky

A wave-gliding robot has been deployed off the coast of San Francisco to stealthily keep an eye on great white sharks in the Pacific Ocean.

The surfbot is part of an arsenal of ocean-tracking tech that's receiving data from acoustic tags on the predators and transmitting it back to shore. Fixed buoys also pick up the sharks' signals when the animals swim within 1,000 feet (305m) of them.

"Our goal is to use revolutionary technology that increases our capacity to observe our oceans and census populations, improve fisheries management models, and monitor animal responses to climate change," said Dr Barbara Block, a Stanford University marine sciences professor leading the project.

The bright yellow, seven-foot surfbot will help the buoys to get the shark data back on dry land throughout the summer and autumn in the ocean between Monterey Bay and Tomales Point, but eventually Doc Block hopes the network could run down the entire west coast, tracking fish ranging from salmon smolts to white and mako sharks.

Just in case you're thinking about taking a dip in the water out there this summer, you can also track the sharks yourself with a free iOS app called Shark Net. Fandroids will just have to risk getting eaten. 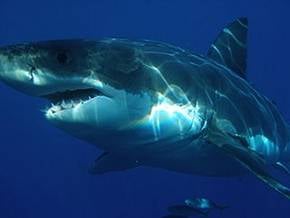 The project is part of TOPP - Tagging of Pacific Predators - which is part of the international Census of Marine Life. TOPP gathers info from 75 boffins in five different nations to track the migrations of 4,300 different animals including sharks, seals, whales, turtles and seabirds.

Ten years of data so far has pointed out the US west coast as a hotspot for predators in the Pacific, gathering data on bluefin tuna, white and mako sharks, blue whales, leatherback sea turtles, elephant seals and others during the late summer and early autumn.

That data tells the surfbot team where to put their buoys and where to guide the wave gliding tracker to follow Carcharodon carcharias (the great whites). The bot, app and other tech was funded by a $104,000 Rolex Award for Enterprise won by Doc Block earlier this year.

"My mission is to protect ocean biodiversity and the open sea," she said, adding that she's working on getting a United Nations World Heritage site designation for regions of the California current.

"This place is one of the last wild places left on Earth." ®