Sensing mounting frustration that Linux ISOs aren't downloading fast enough, the IEEE has announced a new group that aims to bring wired Ethernet speeds up to 1Tbps by 2015 and as fast as 10Tbps by 2020.

The announcement comes shortly after the publication of the IEEE 802.3 Ethernet Bandwidth Assessment report, which found that terabit-speed networks will be necessary to support overall capacity requirements by 2015 if current trends continue.

"The information gathered by the Bandwidth Assessment Ad Hoc demonstrates the ongoing, exponential bandwidth growth that is happening in varying application spaces on a global nature," John D'Ambrosia, who will chair the new IEEE group, said in a press release on Monday.

The report based its projections on analysis of eleven significant data sources, including historical Ethernet usage by internet exchanges, HPC facilities, and data centers. Among the report's findings was that at the current rate of growth, the global distribution of Ethernet link speeds is due to turn on its head by 2013.

In 2011, roughly 21 per cent of all Ethernet links were found to be operating at 100Mbps, while only about 8 per cent were running at 100Gbps. By 2013, the report projects, those figures will reverse, with 100Gbps Ethernet capturing 21 per cent of the market and 100Mbps Ethernet's share shrinking to less than 100Gbps' share is today. 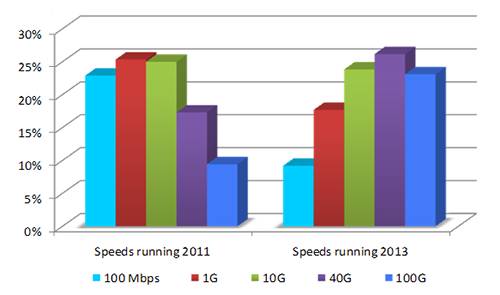 In particular, the report noted the consumption of streaming media as a major factor in the growth of global bandwidth requirements. As of January 2011, the report found, the amount of bandwidth used by streaming media had more than doubled since the previous year, and that usage had not come at the expense of any other form of network usage, including web browsing, peer to peer, and other protocols.

Throughout the last five years, however, use of 10Gbps Ethernet among IXPs has grown steadily. In 2010, the report found, the majority of IXP links were running at 10Gbps, while all other forms of Ethernet were trending downward in the industry. 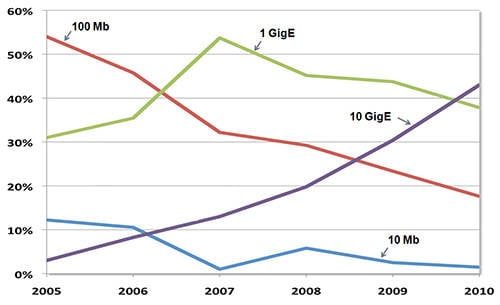 Use of 10Gbps Ethernet has grown steadily among internet exchange providers (Source: IEEE)

But the most aggressive growth in network bandwidth consumption is happening in the financial sector and in HPC for data-intensive science, the IEEE report found. One example cited was the Large Hadron Collider, which pushes 15 petabytes of data per year to Tier 1 storage sites around the world.

"The phrase 'big data' doesn't adequately describe the revolution occurring in so many scientific disciplines," Gregory Bell, director of Energy Sciences Network (ESnet) said in a statement. "ESnet's 100 Gbps network will keep it ahead of the data curve for a time, but within three to six years we predict the need for a minimum of 400 Gbps connectivity to meet data mobility needs of experiments in fusion, astrophysics, genomics, climate research and other fields.

During the period from 1993 to 2005, the IEEE report found, processing power for HPC grew linearly by a factor of ten every four years. While that trend is not necessarily expected to continue at exactly the same rate, the report notes that the US government plans to build an exascale HPC machine by 2019.

Such fast, highly parallelized machines require efficient system interconnects, and current Ethernet standards are not up to the task, the report states, as they don't support lane redundancy.

In addition, the high-frequency trading systems employed by the finance industry are known to be sensitive to latency, the report says. As a result, financial-sector networks often transmit data uncompressed, which requires more bandwidth.

"The ability to support this exponential rise in traffic will continue to pressure the entire Ethernet eco-system to continue to drive cost per bit downward, so that manufacturers, service providers and users can be offered cost-effective, standards-based solutions, products and services," said Brad Hall, senior VP of market research firm LightCounting.com.

The IEEE says its 802.3 Industry Connections Higher Speed Ethernet Consensus group is open to virtually anyone with a stake in the future of the networking standard, including kit vendors, internet exchanges, data centers, telecoms carriers, high-performance computing (HPC) researchers, and others.

The group will have its first meeting at the IEEE 802.3 Interim Meeting, to be held September 24-28 in Geneva, Switzerland. ®