Economists at the Office of Fair Trading have quietly demolished the UK government's case for minimum alcohol pricing.

Minimum pricing regulations are likely to see more booze sold than ever, they predict, contrary to the government's desire to curtail alcohol consumption. Profiteering is also likely, with higher alcohol prices gouging regular drinkers' wallets. Such effects are predictable and commonplace and have an enormous cost to the economy, according to studies by the Organisation for Economic Co-operation and Development (OECD) that were cited by the OFT.

In Scotland, a 50p-per-unit minimum has been proposed: it raises the price of a bottle of bargain-basement supermarket plonk to £4.69, and a 70cl bottle of generic paint-stripper vodka to £13.13. The primary benefit is said to be improving the nation's health: a figure of "2,900 fewer premature deaths per year" is touted as a result of a 50p-per-unit price regulation. "The average high-risk drinker’s costs would rise by over £300 a year, requiring a reduction in consumption," according to this taxpayer-funded campaign website.

(The site quoted above talks of the hardened drinker being "required" to consume less as a consequence of paying £300 more for alcohol. But the hardened drinker is an addict, and when the price of the drug rises addicts tend not to cut back on consumption, but resort to crime to obtain the drug. This is ignored by temperance advocates.)

The OFT submission to the Commons Select Health Committee's inquiry into the government's alcohol strategy was made in May, but only emerged [PDF] last week.

"International studies, including by the OECD, suggest that restrictions on retail prices, such as banning below-cost selling, ultimately lead to lower productivity and worse outcomes for consumers," the OFT points out.

The report they refer to is here [PDF], and despite being hefty, is well worth a read. We learn that minimum pricing, not so surprisingly, causes knock-on price rises. After France introduced retail price restrictions, food prices rose at almost twice the general rate of inflation, and the pricing shackles played a part. Irish families paid €500m thanks to rules preventing below-cost selling.

Nor can George Osborne expect any fiscal windfall, the OFT warns. "Unlike an increase in tax, additional consumer spending on alcohol would go to private firms rather than to the government," the submission notes. The OFT also warns of "inadvertent" collusion between firms as they anticipate the regulations.

The OFT generously concedes ground to academia that imposing minimum pricing may have social or health benefits. Alas, this is anything but scientific - the science strongly contradicts this. In 1999, American economist Thomas Dee found that, in the States, "beer taxes have relatively small and statistically insignificant effects on teen drinking". It isn't what the prohibitionists want to hear.

The watchdog also quoted a notorious Sheffield University meta-meta study on alcohol pricing and demand. The Sheffield academics knew about Dee's beer tax finding and wrote in their study: "Having taken this potential confounding variable into account, the effect of taxes on drinking disappeared." Having acknowledged this point, they then ignored it.

Some corners of academia, particularly social policy research, are flourishing by presenting evidence that conveniently meets the demand from politicians, which helps stimulate future funding. Report authors have an active role in the development of policy, tailoring their conclusions to government strategy. (Here's a comical illustration.)

The middlemen are the commissioning bureaucrats in Whitehall. "They want the story to be a very strong one and don't want to be made to look foolish," one DEFRA official pleaded with the Climatic Research Unit at the University of East Anglia, in an email that emerged in the Climategate archives. 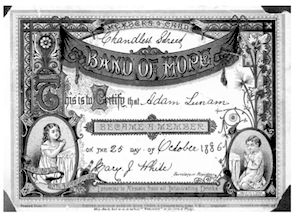 'Band of Hope' pledge card for teetotallers. This one's from 1886

In addition to manufacturing evidence, governments and their officials also use your money to generate demand for their policies. As an example of such expenditure, look no further than the Institute for Alcohol Studies, which is one of the most persistent pressure groups and is funded by the Alliance House Foundation (AHF) - a group with a fascinating history.

The foundation was created in Manchester in 1852 by Nathaniel Card, an Irish cotton manufacturer and Quaker. Within a year it was called, grandly, the United Kingdom Alliance to Procure the Total and Immediate Legislative Suppression of the Traffic in All Intoxicating Liquors. It spawned several temperance groups, including the National Temperance Federation, which at their height boasted some 3 million supporters.

Not any more. In 2008, the largest funder of the AHF was the European Union, and the foundation raised just £70 (seven-zero pounds) in donations from the general public. So much for independence. The modern alcohol campaign is really the temperance movement in return - and the AHF provides the link between prohibitionism past and present.

You can find more about the Department of Health's Alcohol Strategy here. ®

Founder of firm at center of fraud claims he's 'not running' right now. Ditched the Fitbit, have you?
Personal Tech26 Sep 2022 | 1