Jury decision 'could change the way competition works' in US

They're done. Apple and Samsung have each given their closing arguments in the epic patent trial over whether the South Korean mobile maker infringed on Cupertino's iPhone patents. For the nine members of the jury, however, the next phase of the ordeal has only just begun.

Weighing the three weeks of testimony to decide whether Samsung truly infringed patents and what damages, if any, it owes Apple will be no easy matter, as the court proceedings on Tuesday demonstrated.

Judge Lucy Koh began the morning in her San Jose courtroom by reading her instructions to the jury aloud for the record, the San Jose Mercury News reports – all 109 pages of them.

Reading through the 84 instructions took just over two hours, during which time Judge Koh repeatedly gave the jurors short "stand up" breaks, as she said, "to make sure we're alive."

The first sections of the list were devoted to basic instructions for jury conduct, such as how to deliberate, how to communicate with the court, how to judge the credibility of witnesses, and the burden of proof by a preponderance of evidence.

Judge Koh then moved on to more specific matters related to the case, such as when the jury should consider that a patent claim has been infringed, and the difference between "utility" and "design" patents (both are involved in Apple v. Samsung).

She adjourned the court for lunch at 11:40am, leaving the bewildered jurors to ponder the 20-page verdict form they would have to confront in their deliberations, which Judge Koh said she expected to begin on Wednesday.

The form, which asks jurors to fill out multiple tables with information on precisely which Samsung divisions or Samsung products may or may not have infringed on which specific models of iPhone or iPad, looks roughly four times as complicated as your average passport application. 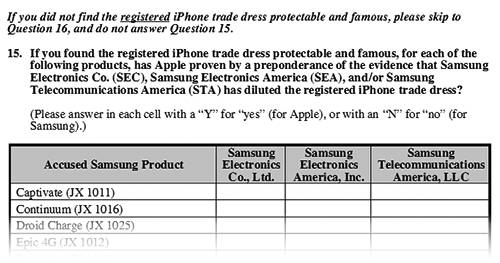 Just one of 33 questions on the jury verdict form. (Click to see full form)

Perhaps the most straightforward item on the verdict form is Question 22: "What is the total dollar amount that Apple is entitled to receive from Samsung on the claims on which you have ruled in favor of Apple?"

On that seemingly simple question hangs much of the trial, however. The nine jurors will have to agree on exactly "the amount of damages that Apple has proven at trial with reasonable certainty," according to Judge Koh's instructions. Some observers fear a hung jury, which could bring the proceedings back to square one.

When Judge Koh returned from lunch, the closing arguments began in earnest, with Apple lawyer Harold McElhinny leading the charge for the fruity firm.

McElhinny described the iPhone as "possibly the most famous product in the world," explaning that original iPhones are on display in the Smithsonian Museum and showing the jury a photo of the Jesus Phone on the cover of Time magazine.

He said the iPhone "shocked the world" and repeated a claim, lifted from Samsung internal documents, that the South Korean firm had experienced a "crisis of design" upon beholding it.

The Apple attorney held no punches throughout his argument, describing Samsung phones as "knockoffs" and saying that the mobile maker "sat with the iPhone and copied every detail, feature by feature."

He said that Apple execs tried to contact top Samsung people about the problem, but the Samsung higher-ups wouldn't take their calls. "Instead they sent you lawyers," McElhinny said, indicating his opponents in the courtroom.

McElhinny concluded his arguments by saying that Samsung had sold 22 million "infringing" devices, netting itself $8bn in revenue – and that therefore the damages awarded Apple should be large, in the realm of $2.75bn.

Samsung attorney Charles Verhoeven then took the floor to try to knock down Apple's claims, calling the fruity firm's damages estimate "ridiculous" and noting that Apple did not produce a single witness who claimed to have been deceived or confused by Samsung's marketing or the design of its handsets.

"The reason Apple didn't provide any evidence of deception or confusion is because there isn't any," Verhoeven told the court.

Pointing out the numerous reporters in the court to the jury, Verhoeven asked them to consider why the press was covering the case so closely. "Your decision, if it goes Apple's way, could change the way competition works in this country," he said.

Verhoeven characterized the similarities between Apple's and Samsung's products as to be expected, saying all smartphones are rectangular, all have rounded corners, and so on. "There is no bad intent, there is no copying," he said, adding that Apple did not truly invent the technologies and design features it is now claiming to own.

Apple attorney Bill Lee – he who does not smoke crack – next took the floor to rebut Samsung's claims. According to Lee, the question was not whether Samsung infringed Apple's patents, but "whether they get a get-out-of-jail-free card."

"Apple took five years to bring this revolution to us," Lee said, referring to the smartphone market that began with the iPhone launch. "Samsung took three months to copy it."

Lee reiterated Apple's claims of patent infringement and said that Samsung's patent counter-claims were invalid, because the handset maker had asserted them in ways that violate antitrust law.

In his own rebuttal, Samsung's Verhoeven insisted that the South Korean firm did indeed "play by the rules," contrary to Apple's claims, and that all Samsung wants is to compete freely in the marketplace, without interference from Apple's lawyers. "Let the innovators compete," he said.

And with that, the final arguments in the nearly month-long patent trial came to a close. The jury will be sequestered beginning on Wednesday at 9am PST, but given the many claims and issues in the case, deliberations are likely to be anything but swift. ®