Curiosity spins its wheels and shoots up the Martian landscape

Pics The driving team at NASA has taken Curiosity out for its first spin around the landing site ahead of its first road trip, as well as shooting up the area with a laser to get the initial readings about what exactly it is trundling across.

On Wednesday, Curiosity advanced 15 feet (4.5m) to give a full rollover of the drive system, then rotated its wheels and spun 120 degrees before reversing another eight feet (2.5m), leaving no skid marks due to its sedate speed. All systems performed as planned, NASA reported at a press conference, and the rover dealt with the fact that it had landed with one of its right treads directly on top of a 3.5-inch (9cm) rock. 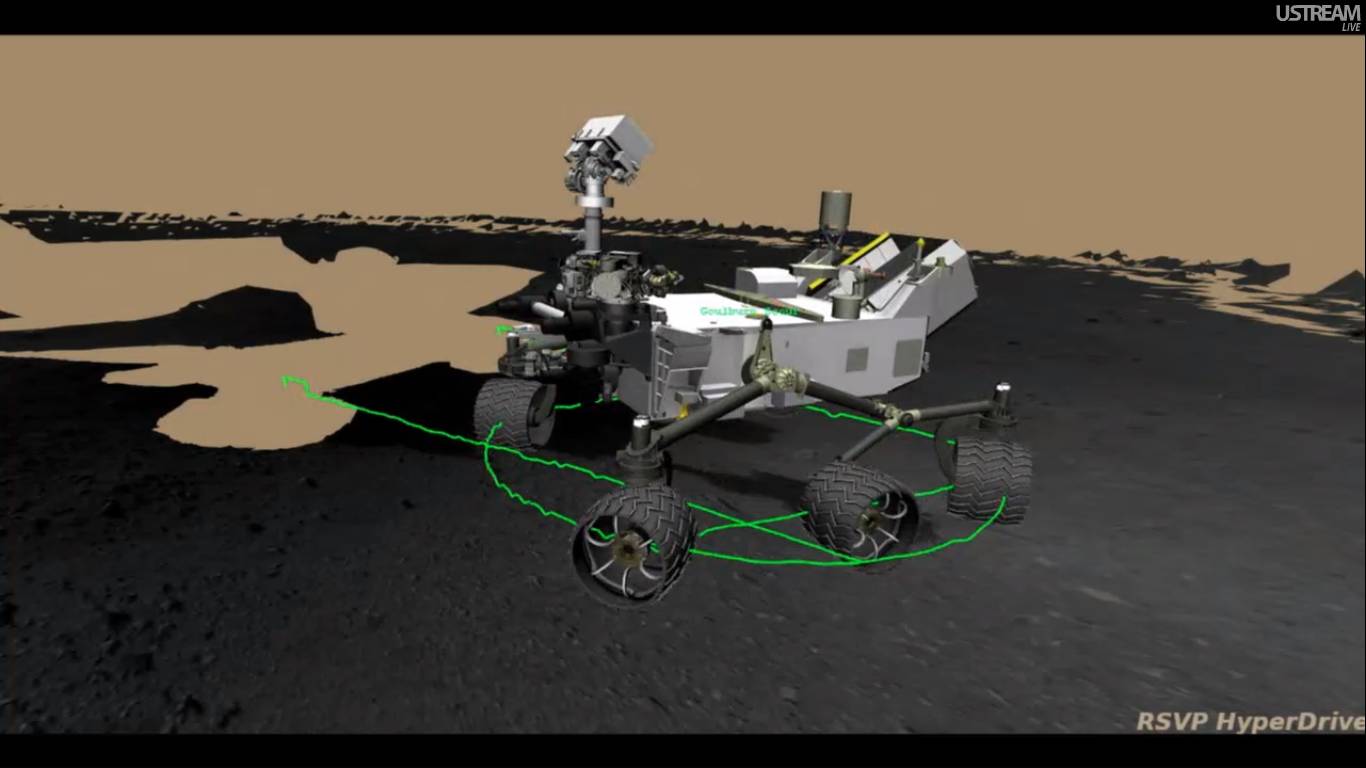 Gonna have fun, fun, fun 'til NASA takes the keys away (click to enlarge)

"We built a rover, so unless the rover roams we haven't accomplished anything," said Pete Theissinger, Curiosity's project manager. "The fact that we clean exercised it and everything was on track is a big moment, a very big moment."

The initial touchdown point on the Martian soil is being named "Bradbury's Landing," in honor of the author who devoted so much of his talents to tales of Mars, with Curiosity's six wheels forming the boundary points. Bradbury died last year but would have been 92 today, and the author last visited JPL in 2005, where he met the staff and piloted a simulator of the Opportunity and Spirit rovers. 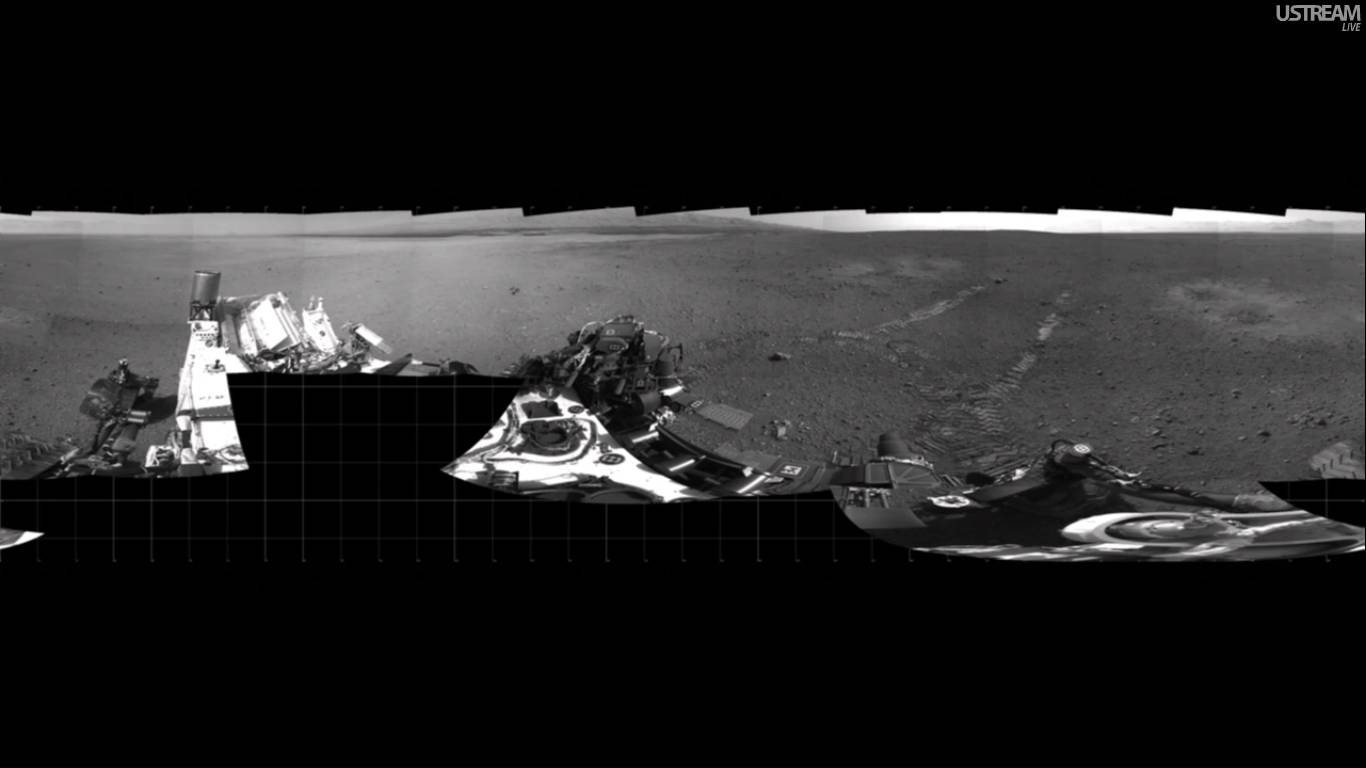 Curiosity's first tracks, with Bradbury's Landing to the right (click to enlarge)

"It was the majority vote of the science team, having been inspired by Ray Bradbury," said Michael Meyer, lead scientist for the mission. "But landing is also an event, it's not an object. It hearkens back to a time of ships landing on the shores of other new worlds to explore."

Also announced were the first spectrographic results of the Chemistry and Camera instrument (ChemCam) which has been lasering the landscape with million-watt bursts and scanning the remains across the spectrum from ultraviolet to near infrared. Before heading out, Curiosity fired a series of bursts at six targets just outside Bradbury's Landing on the rock scoured by the landing platform's jet blasts.

The first hard science figures come back (click to enlarge)

The analysis shows that Curiosity is sitting on a layer of basalt-like material with high levels of silicon, oxygen, and magnesium, with titanium also found in measurable quantities. In the first shots hydrogen was also detected, but this vanished in later probes, so the team is checking out if it is a byproduct of the landing environment.

There'll now be a fallow period for the rover lasting up to a week, while final systems checks are completed and the on-board computers dump data back to Earth. Then Curiosity will set off for the first point of call, a confluence of three geological areas NASA is calling Glenelg, with stops along the way if anything looks especially interesting.

After doing detailed analysis of the area, Curiosity will then take a much longer trek to the base of Mount Sharp, a trip that's expected to take months. On the way, its tracks will leave an imprint in Morse code of the initials JPL, or (".--- .--. .-..") in the surface. This isn't just showing off by the team that built the rover; the marks are also used for visual odometry to check the rover's position and orientation on the surface.

It's going to be a long road ahead for Curiosity, due to NASA's understandable caution (each of the rover's 12 operators must have regular nightmares of getting it stuck) and its slow speed. This latter issue is caused much debate among El Reg readers, particularly those supporters of standards queen Lucy Sherriff and the Special Project Team's units of measurements.

For the record, in ideal conditions Curiosity is capable of moving at a top speed of around 90 meters per hour, or 0.05 miles, nearly ten double-decker bus lengths, 0.6 of a brontosaurus, or just under 643 pieces of linguine.

In reality, the team is going to be stopping a lot to look around and make sure everything's safe, so the best they are hoping for is around 100 meters per day, still not quite a full brontosaurus. ®