The floating application development laboratory called SkyTap is burrowing deeper into the VMware fold and making itself more useful to coders by supporting the Cloud Foundry framework on its eponymous dev and test cloud. The company, funded in part by Amazon founder Jeff Bezos, is also firing up new templates for SkyTap that allow for n-tier applications running in VMs created for VMware's ESXi hypervisor to be moved more easily between the SkyTap app dev cloud and private infrastructure or other production-grade VMware clouds.

The SkyTap app dev cloud runs atop ESXi hypervisors and includes homegrown code for snapshotting compute and storage images, orchestrating application tiers, monitoring, and billing. This cloud runs at a Savvis data center outside of Seattle, Washington – and IT integrator CSC has a white-label version it runs in its own data center for customers.

SkyTap differentiates itself in a number of ways from Amazon's AWS cloud, which is driven predominantly by developers (according to the anecdotes), and one of them, as SkyTap has explained in the past is that file snapshotting is a lot faster on SkyTap than it is on EC2 and S3 over at Amazon.

With the August 2012 release announced today, SkyTap is adding another differentiator: tight integration with VMware's Cloud Foundry. By loading up Cloud Foundry on the SkyTap cloud, you might be thinking that this puts SkyTap (the company) in direct contention with VMware itself. True and not true.

Cloud Foundry is a platform cloud that manages the plumbing underneath Java, Ruby, PHP, Perl, Python, Scala, and Node.js applications. The open source stack also has hooks into the RabbitMQ message queuing software and the GemFire application cache. These features are also part of VMware's vFabric Suite, a commercialized implementation of the Spring Java framework that VMware took control of for $362m three years ago. The overlap between Cloud Foundry and vFabric causes some confusion. Cloud Foundry supports many different application frameworks; vFabric is just Spring.

Back in April 2011, when Cloud Foundry debuted as an open source project, VMware also fluffed up its own platform cloud at cloudfoundry.com as a beta service – it is still a beta service to this day. For all we know, VMware will bring cloudfoundry.com out of beta next week at its VMworld 2012 extravaganza in San Francisco, but perhaps it will not. SkyTap says it can support developers who want to work on a production-grade cloud using the Cloud Foundry platform cloud layer right now, and will do so without charging any supplemental fees. 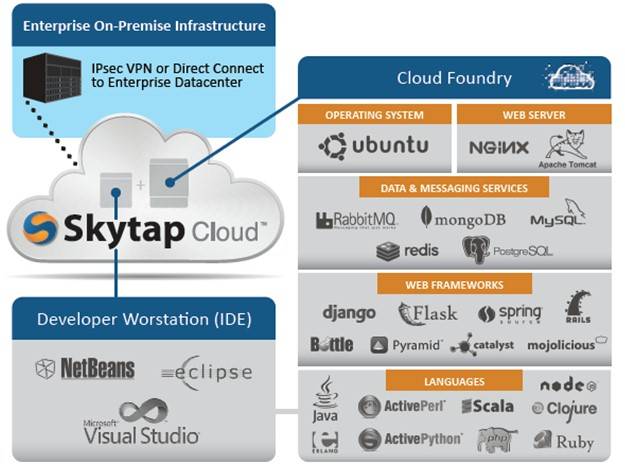 SkyTap is not just fluffing up Cloud Foundry on its dev cloud and keeping it patched and monitored to reduce the workload of developers, Brett Goodwin, vice president of marketing and business development, tells El Reg. The company is also allowing developers to launch instances of the open source Eclipse integrated development environment inside of the SkyTap cloud. And that means they can work from any old crappy laptop and get respectable performance from the IDE since it is running back on the servers. You can fire up an instance of the Eclipse IDE and a complete platform cloud environment in under 60 seconds, says Goodwin. If you want to work from your own Eclipse IDE running on your own workstation, there's a plug-in for SkyTap that will let you do that as well, and there are also plug-ins for the open source NetBeans alternative as well as Microsoft's Visual Studio.

The links between your data center – where Cloud Foundry apps eventually end up – and the developers who are using SkyTap to create them are all done over a virtual private network with IP SEC encryption. This is a plus compared to cloudfoundry.com, which just goes over the public internet. Moreover, the SkyTap implementation of Cloud Foundry is aimed at shops with multiple developers who want to coordinate with each other, while cloudfoundry.com is targeted at individual developers who are working by their lonesome on code.

SkyTap costs anywhere from $500 to $10,000 per month across the current customer crop, which numbers more than 200 distinct companies at the moment, according to Goodwin. For a couple hundred bucks, you get 10 to 20 virtual machines on which to throw different tiers of the application, 500GB of storage, and enough bandwidth coming in and out of the SkyTap cloud and enough IP addresses to be useful. This is a large enough configuration for a team of programmers to do a proof of concept on Cloud Foundry, although they may need to buy extra capacity to scale up and test applications under load.

In addition to the support for Cloudy Foundry, the August 2012 release of the SkyTap cloud also includes the ability to run an ESXi 4.X or 5.0 hypervisor atop of the dev cloud so you can certify that your applications work properly on either VMware server virtualization hypervisor. This is sometimes called nested ESX, and it is not meant for production. It will also probably cause a Higgs boson to appear if you nest too many of them together, but it might be with a good joke to see how deep the nesting could get, like some sort of virtual Matryoshka nesting doll. Goodwin says SkyTap will support the impending vSphere 5.1 hypervisor, widely expected at VMworld next week, after the first update for that hypervisor is released by VMware and its stability has been demonstrated in production environments.

The update also has extensions to the underlying VMware hypervisor at SkyTap that allows for VMs and their applications – and the database code that they are wrapped around – to be exported back to your own virtualized iron or any other cloud running the ESXi hypervisor. You can export in the native VMDK format used by VMware or in OVF or OVA formats. ®