Want a Windows 8 Start Button? Open source to the rescue!

Windows 8 users need not do without a Start button, thanks to an open source application titled Classic Shell that can banish the Interface Formerly Known As Metro (TIFKAM).

El Reg's antipodean lab installed Classic Shell on a Windows 8 RTM virtual machine running under Oracle VirtualBox on Mac OS 10.7.4. We can report that the application installed without a hint of trouble, and as soon as we clicked in its shell-like Start button we were offered a nice set of options to arranged Windows 8 so that it resembled versions of Windows past. 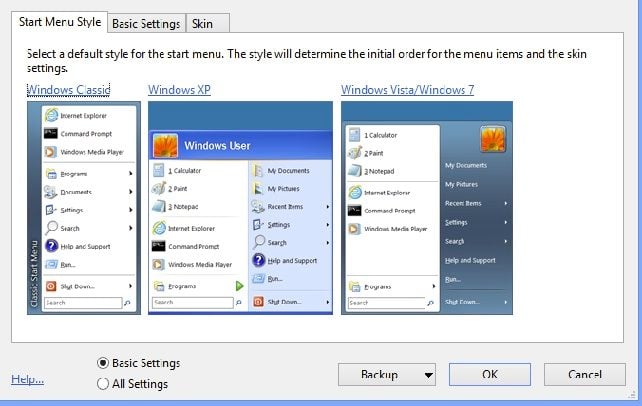 Classic Shell offers the chance to adopt GUIs from Windows past

There's even an option to load up Windows 8 without ever seeking the TIFKAM screen, while the app also happily disables the “active corners” features that invokes the tiled interface.

Classic Shell's origins lie in another controversial Microsoft operating system, Windows Vista, which the authors so despised they set to work on an alternative .

The authors aren't 100 per cent certain that Classic Shell will work with Windows 8, as the app's FAQ indicates there's not been formal testing under the RTM version made available for download last week. We've not been able to test Classic Shell for long, but after an hour or so of experimentation can report that if Windows 8 is inflicted upon you, it'll do a job.

Behold! A Start button under Windows 8

Classic Shell can be downloaded from sourceforge. ®

Classic Shell's developers have been kind enough to list other packages that do more or less the same thing. A couple more have been mentioned in comments.