The flash storm among storage vendors is becoming more frenzied with a major announcement from HDS, the addition of iSCSI support by Pure Storage's flash arrays, and a performance guarantee from flash/disk hybrid iSCSI array startup NexGen, along with Veeam and vCenter support.

Hitachi realised that the best way to incorporate flash media across the entire IT stack was to develop solutions based on original Hitachi intellectual property. This development strategy yields the performance and end-to-end data management capabilities our customers require. The new flash memory controller designed by Hitachi lets us bring to market a series of products designed from the ground up to accelerate computing for big data and mission-critical applications and databases. These uses require real-time processing, enterprise robustness, security and a small environmental footprint. 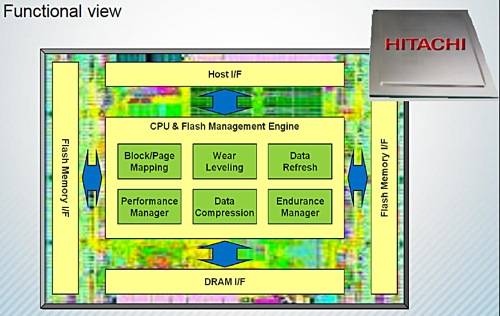 HDS's CTO Hu Yoshida blogs: "Features like HDT (Hitachi Dynamic Tiering) can optimise the use of flash by moving only the hot pages of a volume into a flash tier while the cold pages migrate down to lower cost HDD tiers. In addition, HDP (Hitachi Dynamic Provisioning) increases durability by providing global wear levelling, which supplements the wear levelling within the drives to avoid hotspots."

The company has also announced a flash-based acceleration function for its VSP array, enabled through a licence key, taking it beyond the 1 million random read IOPS level, three times current VSP performance. The array responds to IO requests 65 per cent faster and typical OLTP workload users could see twice as much performance on average.

Yoshida said about this: "With more than 24 threads running against an all SSDs configuration we have measured 1,000,000+ IOPs using 8K random reads. … Overall, the total maximum throughput of VSP with V04A and flash acceleration will exceed 1,000,000 IOPS."

He thinks that cost/GB of flash could become lower than that of disk:

This feature is available to new customers today, as well as to existing VSP customers through a microcode update to V04A.

The next items on the HDS flash product roadmap are shown in the slide: 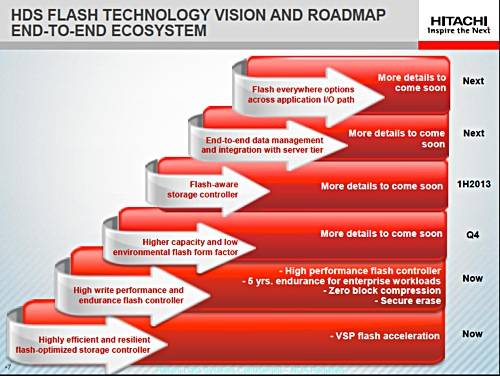 We can expect to see a Hitachi/HDS PCIe SSD, an all-flash array, a flash cache for direct-attached server disk storage, and an external SSD appliance in both the SAN and NAS areas. VSP arrays will use the flash technology to cache disk drives and as a tier.

Hitachi engineers have been working on the flash controller for well over a year and this represents a solid and sustained internal development that could provide strong competition to every other PCIe flash, all-flash array and hybrid flash/disk drive array vendor, especially if the throughput claims live up to their billing.

Version 2.5 of all-flash array startup Pure Storage's Purity software adds in Ethernet iSCSI access to the original Fibre Channel block access. This will increase the markets its channel partners can address, enabling them to go for business from the customers that Dell/EqualLogic and HP/LeftHand go for.

It also adds in ZeroSnap snapshots that can be taken at a rate of 1,000/minute – pretty near continuous data protection. These have no performance overhead and are just new volumes with full capabilities and zero data duplication. Pure says customers can instantly roll forwards ir backward and recover any volume from any snapshot.

The company has also added a vCenter web client plugin so vSphere can be used to manage its array.

Its getting VMware Ready and VAAI certification, and this software release will be seen at VMworld in San Francisco next week, and ship in the autumn. 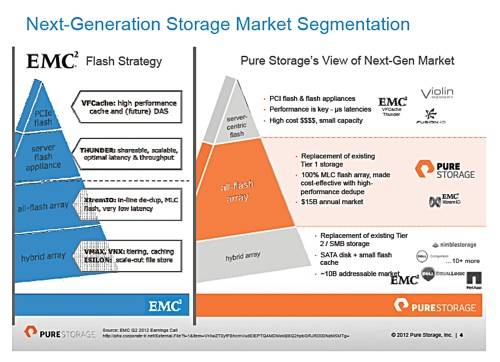 The Pure Storage array replaces, it says, existing tier 1 disk drive storage, because it is much faster and affordable and cost-effective, less costly than tier 1 disk arrays in fact, through its use of deduplicated MLC flash drives. Pure is not in the hybrid flash/disk drive array business like Nimble Storage, Tegile and others which is geared to replace tier 2 disk drive arrays.

If you don't see the improvements over your existing storage with Nexgen's n5-150, NexGen provides a performance or capacity upgrade at no cost.

NexGen has 7,200rpm disk drives in the front of its enclosure with processor/PCIe bus/SSD combinations behind them and not layered on top – so it's pretty space-efficient.

Compared to disk drive arrays, what are we saying? A rack enclosure of flash delivers a whole lot more IOPS than a rack enclosure full of disk drives? Well, duh, that's obvious. You guarantee your Ducati motorbike is faster than my UPS truck and takes up less space? There's a surprise. That doesn't seem a good guarantee.

To get the same n5 performance from a conventional hybrid array you'd need to buy one with a three times bigger enclosure in rack height terms, the firm says. What's a "conventional" hybrid array? It's a blend of SSDs and disks in an existing storage architecture. Oh, I get it, "existing" storage architecture as in: rule out start-ups like Tegile and Tintri. That doesn't seem that good a guarantee either.

Compared to all-flash arrays you will get three times more capacity per U. Let's think of Skyera's Skyhawk which offers 44TB in 1U. Then there's the Nimbus Data Gemini with 48TB in 2U.

The n5-150 offers 192 raw TB and 48 usable TB in a 3U enclosure; that's 16TB/U usable and 64TB/U raw capacity. In usable terabyte terms both Nimbus's Gemini at 24TB/U and the SkyHawk at 44TB/U are better. In raw capacity terms NexGen's numbers don't work either, needing to be 132TB/U for Skyhawk and 72TB/U for the Gemini.

Is this worth the paper it's printed on? It certainly seems to be a way of differentiating NexGen from other hybrid array suppliers, both fellow start-ups like Tegile and Tintri, and trad Johnny-come-latelies like NetApp and EMC but it's of little use against all-flash arrays unless you want one limited to 150,000 IOPS.

In other news, NexGen and Veeam are partnering to have Veeam's Backup and Replication included with NexGen arrays at no extra cost. Existing storage arrays can be used replication targets.

A vCenter plug-in is coming so the NexGen array can be managed and monitored through vSphere and datastore quality of service can be defined and changed on the fly. The Veeam and vCenter features can be seen at VMworld in San Francisco's Moscone Center next week. ®