HP's storage results sank 5 per cent year-on-year in its latest quarter due to declining EVA array and tape product revenues.

CFO Cathy Lesjak said in the earnings call: "In Storage, the continued strong performance of 3PAR with more than 60 per cent growth and StoreOnce with double-digit growth did not offset the decline in EVA and tape revenue. External disk revenue was flat year-over-year, and total Storage revenue was down per cent year-over-year. "

EVA is HP's long-standing mid-range modular disk drive array, which occupies a position in the market not available to HP's acquired 3PAR drive array technology, which is used to build larger and faster arrays generally.

HP pulled in $924m from its storage products, which compares to $990m in the previous quarter and $976m a year ago. A chart of its quarterly storage revues shows pronounced seasonal patterns and a possibility that storage revenues for this fiscal year could be lower than those last year. 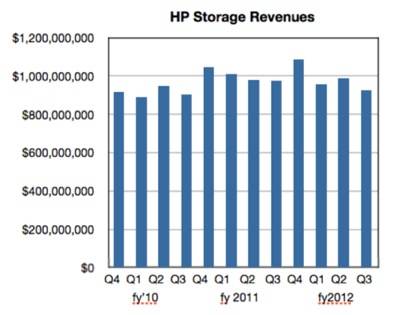 The company is in a transition and engineering developments of the 3PAR, StoreOnce, IBRIX, object and memristor technologies are needed to offset the declines in EVA arrays, and LTO and DAT tape. It is lacking its own flash storage technologies outside the arrays and this may be an area of concern. ®