Our audacious Low Orbit Helium Assisted Navigator (LOHAN) project is advancing rapidly on multiple fronts, and as well as mission control boards and fantastical flying trusses, we've been able to dedicate some time to the icy issue of the controversial Vulture 2 launch rod.

Our proposal is to suspend the spaceplane under the truss on a 10mm diameter titanium rod, which will pass through two Teflon inserts in the top of the aircraft's fuselage.

You can see our graphic of the concept below. It's merely for illustrative purposes, and is therefore neither to scale, nor an accurate reflection of the final design of the Vulture 2 and its exact position under the truss.

LOHAN regulars will note we've reduced the size of the aluminium plate behind the spaceplane, having taken on board your objections to our original design... 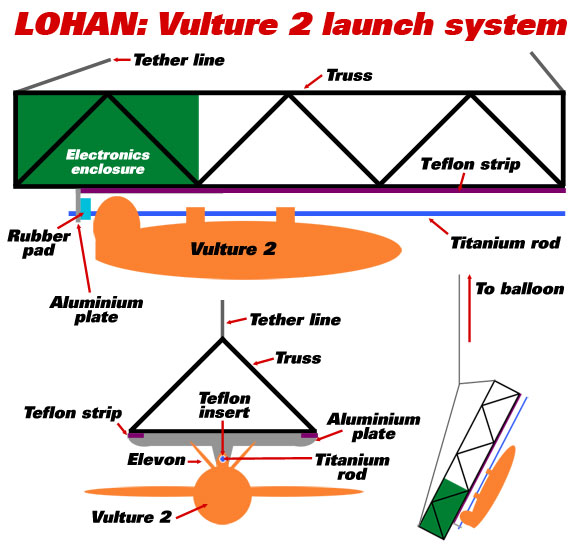 To clarify, the Vulture 2 will be allowed to rock freely on the titanium rod, to prevent the Teflon inserts icing to the metal. The Teflon strips running longitudinally under the truss will be fixed to a foam backing. They're designed to prevent damage to the wings if they swing against the truss on the ascent. If you've been sitting at the back and not paying attention over the last year, there's more here.

Back in April, the idea of the Teflon inserts prompted reader LeeE to note:

This would allow the Vulture 2 to rock a bit, and also prevent too tight a grip on LOHAN's rod ending in an embarrassing jam.

So, we got in touch with silicone hose manufacturer Venair, which kindly provided us with a sample of its Venaflon tube, boasting a smooth PTFE liner, surrounded by a silicone tube reinforced with polyester textile and a stainless steel spiral.

The problem with this magnificent assemblage was the outer diameter of the beast - far too big to make it viable for incorporation into the Vulture 2's fuselage.

Accordingly, we got a couple of custom Teflon inserts hewn from the living PTFE, and here's one hugging a test length of steel tube:

Before you ask, we should explain that the conical outer profile is because the fat end - once epoxied into the spaceplane's fuselage - will face in the direction of travel, meaning there's no chance of the insert being torn out of its mounting aperture by sudden acceleration forces.

Yes yes, we hear you cry, that's good thinking, but what about the dreaded Teflon frozen solid to titanium rod apocalypse scenario?

As the snap shows, drops of water have frozen solid to the tube, presenting a potential jamming problem. This is what we expected, so we deployed a tube of lube, namely Molykote 33 low temperature grease, which works down to -73°C... 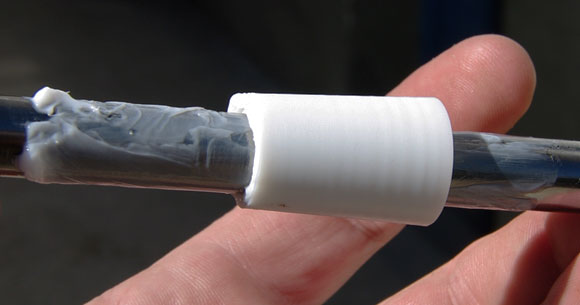 ...and which prevented the build-up of frozen droplets: 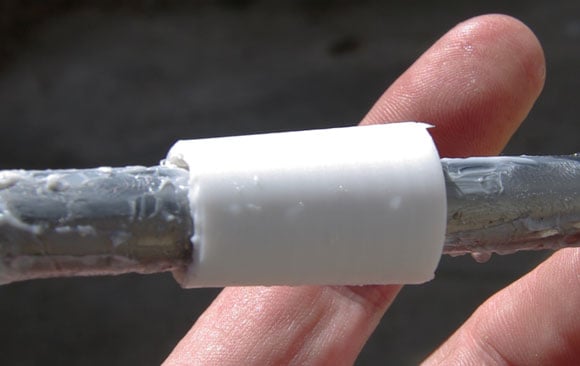 It's not really clear in the above photo, but most of the water froze into a kind of fine powdered ice, which proved powerless to prevent the insert sliding freely off the tube.

Just to demonstrate how effective the Teflon/grease combo is, we then semi-submerged the insert and tube in water, and froze the thing solid, to allow water/ice penetration into the gap between the tube outer surface and the insert's inner surface:

Slivers of ice did indeed form in the aperture, but didn't stick to either the Teflon or the tube, and simply broke away with a minimum amount of force applied to the former.

In conclusion, then, it's fair to say our cunning plan will work. The grease and Teflon are more slippery than a lard-rubbed Spanish politico wallowing in a tub of eels, and even heavy icing conditions won't prevent the Vulture 2 flying off the launch rod at a rate of knots.

We're off to crack a few Bank Holiday weekend beers, while you lot can get down to pondering the one critical thing we've doubtless overlooked, which will bring us down to earth with an almighty crash when we get back to work next Tuesday.

Just to pre-empt the obvious gripes, we will test the inserts with the real titanium rod, when we have it, as well as cranking the temperature down a bit more to make sure everything's hunky-dory. Cheers. ®