Google and hardware BFF Sony will be hoping the second time’s the charm for their latest joint foray into the living room. The first Google television adventure floundered in the States, scuppered by hardware complexity and inadequate software. This time around we have a simpler set top box proposal, the NSZ-GS7, and the Google Play store to back it up. What could possibly go wrong?

Certainly when it comes to hardware, Sony has built a very solid piece of kit. The boaty design of the NSZ-GS7 box is idiosyncratic, and the flipper remote is a clever piece of engineering. One side touch-pad IR zapper, the other a Bluetooth backlight Qwerty rubber keyboard, it allows sprightly navigation around apps and menus, as well as easy input into the integrated web browser. There’s even a 3-axis motion sensor, presumably for future games development.

Bizarrely this multi-purpose doofer has been denied an integrated microphone, an embellishment reserved for the upcoming Google TV Blu-ray player, the NSZ-GP9. Sony says it has released the API for the two-faced remote and remains hopeful developers will develop novel applications for it. 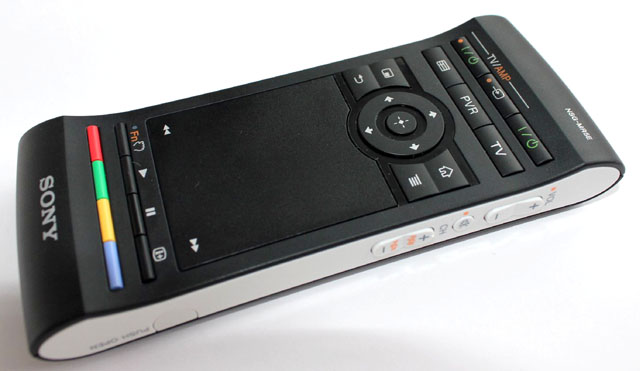 ...and the touchpad alternative on the other side

The box itself features two HDMIs (in/out), an optical digital audio output, Ethernet and twin USBs. It’s a fan-less design and therefore silent, however it does run hot, despite the vented sidepanels. Average power consumption is 8.5W, dropping to 7.3W in Quick Start standby. If you’re prepared to wait for the box to boot, full standby drops this to 0.7W. If you don’t have an Ethernet feed, there’s Wi-Fi available.

Back panel interconnects feature the basics

The power beneath the Google TV hood is provided by a Marvell Armada 1500 processor. This dual-core multimedia-friendly SoC incorporates a Qdeo video processor, responsible for upscaling and 3D video duties. It also enables the NSZ-GS7’s picture-in-picture functionality; one core handles the web, the other live TV. Image quality is excellent. Not only is the 1080p UI crisp, but streaming videos are low on compression noise. 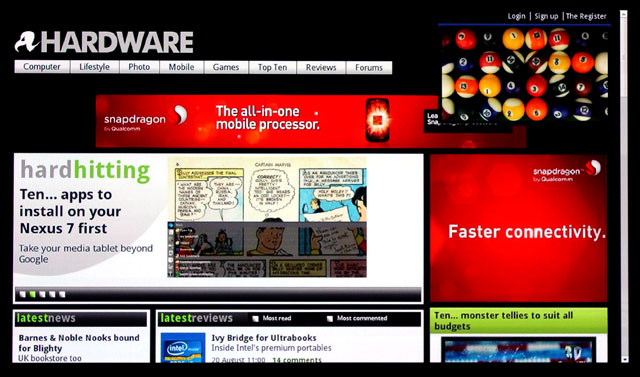 Picture in picture: web browsing with TV in the top right, although this image can be repositioned

The Google TV box has no hard drive, but there’s 8GB onboard for app storage and miscellaneous detritus. It runs an HD TV optimised version of the Android Honeycomb OS, but that doesn’t mean you have full access to everything in the Google Play store.