Comment Imagination-fostering Lego is 80 years old this month and far from its roots as a creativity-inspiring construction toy for girls and boys.

Way back in 1932, Ole Kirk Kristiansen, a Danish joiner and carpenter, found he wasn't making enough money from carpentry anymore and decided to try making and selling wooden toys instead. Although he didn't know it yet, he was on his way to building the Lego company, which would eventually have some of the most recognisable and long-lasting toys in the world: bricks and yellow minifigurines.

The whole story, from setbacks that included two fires, a world war and plain old hard times, is told in a charming video animation (above) released by Lego for the anniversary. If you believe the cartoon, the Kristiansen family kept reinventing Lego until they came up with the iconic bricks that are still around today by watching their own children play with the toys the factory built. And Lego today says that it spends a lot of time finding out exactly what it is that children want so it can give it to them.

According to that research, girls aren't into Lego. Poul Schou, senior vice president of product group 2, told The Register that Lego was for boys, not girls, because although both sexes loved the larger preschool bricks of Duplo once the girls hit five, they weren't interested in construction anymore.

"We have seen that girls seem to be less interested in continuing with our products when they get to four or five years old so we don't really get them into the Lego system," he said.

Here at Vulture Central, that seemed really odd. Not only did everyone in the office, regardless of gender, remember playing with and loving Lego throughout their childhood, for the most part, their kids, both boys and girls, love it as well. 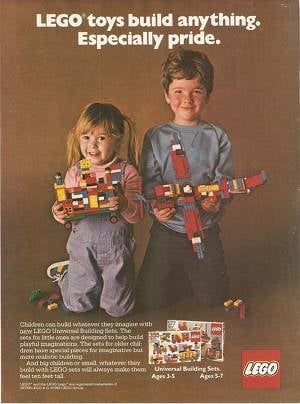 Lego was reluctant to explain its research methods to El Reg, but claimed that it knew that girls don't like the Lego sets that are available for over-fives.

"We have a department doing extensive research and consumer surveys. This is conducted on a regular basis globally, so we have a great insight," the firm said. "We do not however disclose detailed information on this."

Schou said that the company got "a lot of feedback from boys and girls". The kids are encouraged to go online to talk about the products they buy and what age they are, and the boxes often include incentives to answer Lego survey questions as well.

Of course if girls aren't buying Lego stuff, they won't be answering any questions, which would be a kind of answer in itself (although whether the answer would be "Girls don't like Lego" or "Girls don't like surveys" would be hard to figure out).