It's a good thing looks aren't that important, right?

Review Microsoft offended thousands in April with a preview of its next Visual Studio, a John-Major-inspired, grey affair intended to take Microsoft’s all-encompassing IDE closer to the look of Windows 8.

Thousands gave the new look a thumbs-down on the Microsoft UserVoice poll, with people demanding a return to colour.

The day of reckoning has now arrived as, with the release to manufacturing of Windows 8, Microsoft has made Visual Studio 2012 available to subscribers on MSDN – or for free as the Express series.

What do we get? The revamp retains something of the Metro look, and you can choose between Light or Dark themes. Microsoft has kept the changes it added following criticism of the preview, with a few splashes of colour, but the changes are subtle and the IDE still looks grey and washed out.

Microsoft’s goal was to enable developers to focus more on their code, but there were few complaints about distracting colours in earlier versions, whereas the new IDE does tend to make all the icons look the same. It also seems odd that Microsoft puts so much energy into IDE design rather than, for example, implementing more of C++11 in Visual C++.

That said, the icon designs are something you soon forget about when working. Other things matter more. Performance is good and the IDE is rich in features without feeling cluttered.

Visual Studio is an extensible shell, so what you get varies according to which bits you have chosen to install. Office 2013 and SharePoint 2013 development, for example, is an add-on download. There are five languages supported as standard: Visual Basic, Visual C#, Visual F#, Visual C++ and JavaScript. Note that a “JavaScript” project in Visual Studio is for the Windows Runtime, though there is also a decent JavaScript editor for web projects. Multi-targeting means you can choose any version of .NET from 2.0 up to the new 4.5. 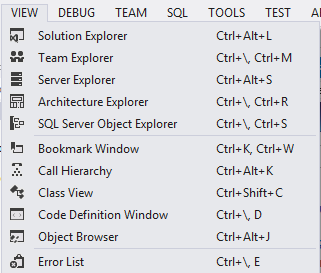 Hit New Project and there are hundreds of templates to choose from, including one for Windows Phone 8 which currently trails out with a “Coming soon” message. The nearly-forgotten Silverlight is still supported, while for desktop applications you can choose between several C++ types, and Windows Forms or Windows Presentation Foundation (WPF) for .NET.

A quick look at some notable features

First, Windows 8 development. Microsoft is pushing its new platform hard, and Visual Studio has all you need to build what the IDE calls “Windows Store” apps. Given that the platform is new, the tool support is impressive. You can design the user interface either in XAML, the XML language first used for WPF, or in HTML. XAML has a two-way visual designer, so you can edit either in code or visually and the changes are synchronized. A separate application called Blend provides a design tool for both XAML and HTML.

You can debug a Windows Runtime app either by running it locally, or in a simulator, or on a remote device. The simulator is intriguing because it is actually a remote session into your own machine, providing a way of running not-Metro apps in a window. The simulator lets you adjust resolution, fake multi-touch, and take screenshots. Note though that it is not a safe environment, since it is a real session on your development machine.

Once complete, a Store submenu has all the options you need to publish an app to the Windows Store. Apps are subject to both automated and manual tests, following which Microsoft signs and publishes the app. The manual element is meant to take no more than five days. 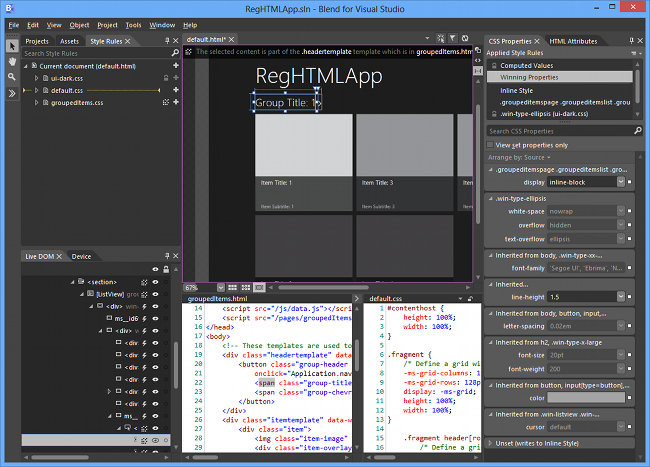 Blend, the visual user interface designer for HTML and XAML

Microsoft has made Azure deployment easier in this edition of Visual Studio. Azure apps now take several forms. If you choose the Cloud option in a Visual Studio template, you can create applications according to the old model: Web Role, WCF (Windows Communication Foundation) Role, Background Worker Role and so on. You can debug on a local Azure compute emulator. When it comes to deployment, you can generate and upload a certificate to authorise your PC, following which Visual Studio can easily publish the application, and even enable remote desktop to the Azure Virtual Machines.