Intel has said it'll start shipping laptops and smartphones that can share power wirelessly towards the end of next year.

The system will see laptops and smartphones sharing power with an integrated transmitter and receiver chipset from semiconductor designers Integrated Device Technology (IDT). Intel says it'll begin building the tech into ultrabooks, smartphones, and standalone chargers by the middle of next year, which should mean a full commercial rollout in 2014.

Intel's keeping fairly quiet about the details of the system, no doubt saving the juicy stuff for the forthcoming Intel Developer Forum (IDF) next month. There's no data on cost per unit and, crucially, on power wastage. Wireless power isn’t particularly efficient at the best of times, and charging your phone at the expense of the laptop could be a waste of time.

Wireless power has been around for over 100 years but it seems we might at last be getting a large-scale rollout of a system. The 19th century scientist (and soon-to-be museum piece) Nikola Tesla first demonstrated that power could be transmitted wirelessly, but the technology laid largely fallow, although it has been vital to the RFID industry for many years.

When Intel powered a light bulb wirelessly at IDF 2008, it was slightly depressing to see how little things have moved on more mainstream applications. A year later, Palm demoed its Touchstone wireless charging system, and companies like Nokia, TI, Samsung, and Sony formed the Wireless Power Consortium (WPC) to push a common standard for transmission based on induction. 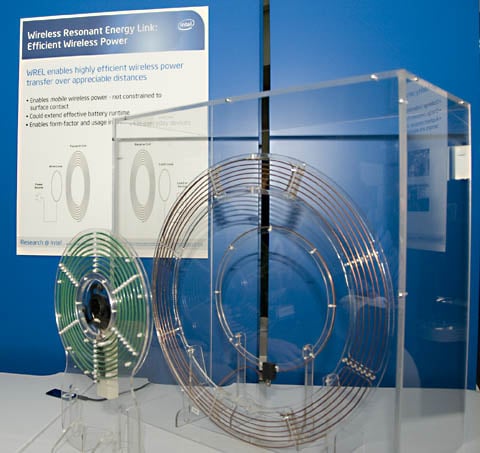 Intel's come some way since this 2009 prototype, but ended up buying in from IDT

Samsung has since added wireless power from the WPC specs, dubbed Qi, to its S3 smartphone and the consortium has over 60 products that also use the system. But it still isn't what you'd call mainstream.

Intel isn't a part of the WPC and won’t comment on whether the IDT technology will be available to other chip makers, such as ARM or Samsung, who have a much stronger position in the smartphone market. If Chipzilla is keeping the system to itself, then it looks likely that this will be another niche wireless power system, since market demand for Intel-based smartphones has been tepid at best and Qi has a good lead.

"We welcome the advancements in resonance technology and will support its continued success by delivering the most integrated and full-featured ICs in the world," said Arman Naghavi, general manager of the analog and power division at IDT in a canned statement. "IDT is excited to collaborate with Intel and looks forward to playing a key role in the proliferation of wireless power technology." ®