ANU scientists in a record-breaking tangle

Eight entangled modes from one laser

A group of ANU researchers says it’s taken a step towards usable quantum communications with a setup that creates eight entangled modes from a single beam, doubling the world’s previous record.

The “easiest” (since entanglement isn’t so easy to create) way to create entanglement – and therefore lay the basis for quantum teleportation of information – is to use one source per beam. However: if you need a large number of channels, things quickly get impossibly complex; and the capacity of any channel is limited to the bandwidth of that single beam.

That puts a premium on the ability to create multiple entangled modes using a single laser – in a rough analogy, it would yield the same sort of benefits that WDM delivers in the classical world, where different wavelengths down one fibre expand its capacity.

The new ANU work, available in full at Nature Communications, describes a setup that generates multiple entangled states, with “the ability to switch between different linear optics networks in real time”. 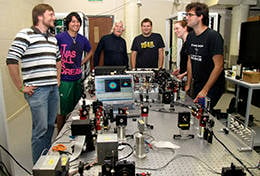 The researchers, led by PhD researcher Seiji Armstrong of the ANU’s Department of Quantum Science, defined the entangled modes as “combinations of different spatial regions of one beam”, allowing many entangled modes to be detected with a single pair of multi-pixel detectors.

In this ANU release, Armstrong said “entanglement experiments around the world were getting very complicated. Each entangled mode of light required its own laser beam, as well as a whole range of other equipment. Given that a quantum computer would need hundreds or thousands of entangled states of light, this was impossibly complicated.”

That complexity is vastly reduced, he said, by entangling eight quantum modes of light in a single beam. “Our research shows that it is now possible to create a high bandwidth light beam with relatively a lot of quantum information on it.” ®