Nuclear raygun tank on the prowl

The Mars-invading laser-toting nuclear-powered space truck Curiosity is off on a 400-metre jaunt to try out its life-hunting drill. 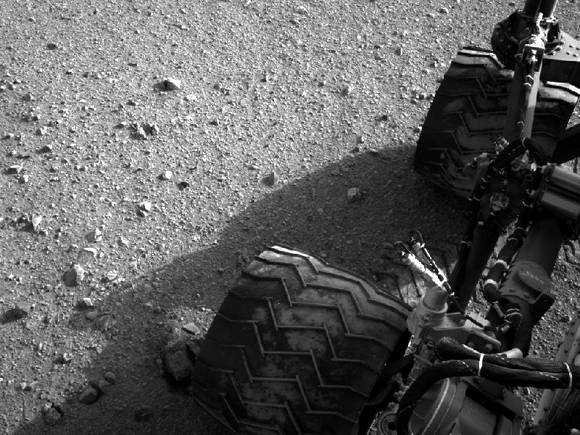 These boots were made for walking

NASA's rover is trundling eastward and completed a 16-metre jolly on Tuesday that was longer than its first two excursions combined. Those test drives were used to check out its mobility system and position the machine to inspect an area scoured by exhaust from one of the engines of the Mars Science Laboratory craft that lowered Curiosity to the Martian surface.

The rover's destination for this trek is Glenelg, a beauty spot a quarter of a mile away where three types of terrain intersect.

"We are on our way, though Glenelg is still many weeks away," said Curiosity project scientist John Grotzinger. "We plan to stop for just a day at the location we reached [on Tuesday], but in the next week or so we will make a longer stop."

While it's on its longer wander, the rover will get a chance to test its robotic arm and the instruments attached to it.

Curiosity's Mastcam will collect a set of images of the terrain towards Glenelg, which is on the lower slope of Mount Sharp. Those snaps, along with the images taken from the landing site, will help boffins construct a 3D model of distant features and possible driving routes for the rover.

Drilling at Glenelg is part of Curiosity's primary mission, which is to assess whether the selected study area ever offered environmental conditions that could support microbial life. ®