It's all touch and go

IFA 2012 At the Mobile Unpacked event in Berlin last night, Samsung showed off its Windows 8 handheld devices that appear in its new Ativ range of computing products that all feature touchscreen functionality.

The Windows RT Ativ Tab is a 10.1in fondleslab with a 1.5GHz Snapdragon S4 dual-core processor with 2GB RAM and 32/64GB storage options, along with a micro SD card slot that can notch it up by another 64GB. The device supports full HD playback although the screen is only 1366 x 768. The 5Mp camera is good for 720p video shooting too and there’s a 1.9Mp camera up front for video chat.

Weighing in at 570g and just under 9mm thick it’s an easy carry and although Samsung is shy of how long it expects the on-board 8200mAh battery to last running Windows 8 or those HD movies as there’s micro HDMI and USB 2.0 support too.

If you want a companion Windows 8 phone or don’t fancy a tablet, the Ativ S mobile has similar specs but features an 8Mp camera, a 4.8in screen and runs Windows 8 Apollo. Samsung seems to be in the mood to go large with its portable offerings although how long powering such a device lasts remains to be seen, although its 2300mAh battery is a decent capacity for a mobile. 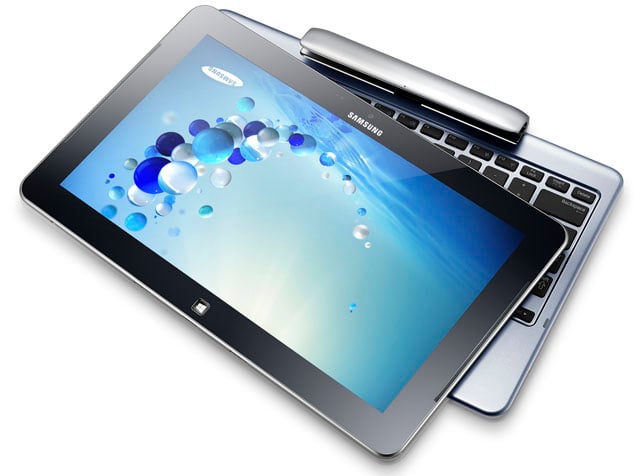 Also on show was its Ativ Smart PCs which are 11.6in slate plus detachable keyboard affairs that, like the Galaxy Note, feature the S Pen stylus. If you opt for the Pro version you get an Intel Core i5 CPU and a full HD 1920 x 1080 screen, while the standard model resorts to an Atom processor and a 1366 x 768 display. While running Windows 8, an appealing aspect to both these Ativ Smart PCs is their capacity to offer full Windows 7 compatibility.

Pricing and availability of the Ativ product range has yet to be confirmed. ®