The latest data release from the Wide-Field Infrared Explorer has NASA almost as excited as a Mars landing, with the space agency trumpeting “millions” of new black holes, among other discoveries.

Comparing the infrared received by hot dust-obscured galaxies – “hot DOGs” – to normal galaxies, the authors of this paper at Arxiv note that WISE has turned to be “extremely capable and efficient black hole finder”.

In fact, the sky survey has yielded data on 2.5 million “actively feeding supermassive black holes across the full sky”, at distances of up to 10 billion light-years. Around one-third of these are new observations, NASA says, because the intervening dust blocked their visible light.

However, their activity warms the dust, making them detectable in the infrared. 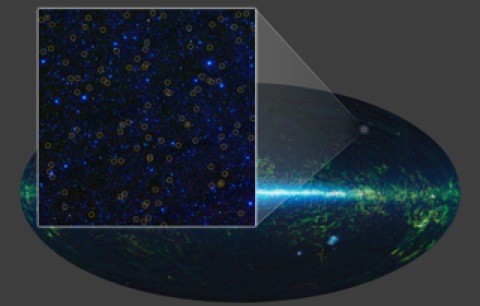 The two other new papers coming out of the WISE data analysis look at hyper-luminous galaxies – around 1,000 of them (here and here). One of them, WISE 1814+3412, has the honour of being the first such galaxy found by the survey, and became the prototype for an all-sky sample of the rest of the thousand “W1W2-dropouts” (referring to sources that WISE can’t detect well at 3.4 and 4.6 microns but visible at 12 or 22 microns).

The hyper-luminous samples identified by WISE were then sampled at the Caltech Submillimeter Observatory to glean better spectral information about them. This survey determined that the galaxies’ SED (spectral energy distribution) isn’t consistent with “existing galaxy templates, suggesting that they are a new population with high luminosity and hot dust”.

NASA notes that “These dusty, cataclysmically forming galaxies are so rare WISE had to scan the entire sky to find them,” according to Peter Eisenhardt, lead author of the paper on the first of these bright, dusty galaxies, and project scientist for WISE at JPL. “We are also seeing evidence that these record setters may have formed their black holes before the bulk of their stars. The 'eggs' may have come before the ‘chickens.’”

The extreme heat discovered by the Caltech study suggests that “we may be seeing a new, rare phase in the evolution of galaxies”, according to Jingwen Wu, lead author of the submillimeter observation study. ®