The Robot soccer World Cup's Humanoid League, Kid Size division, can only be won by the toughest and smartest autonomous mechanical anthropomorphs .

Which surely makes the news the winner of the last two years' competitions is available as a set of open source software and CAD files welcome for would-be managers of robotic Beckhams.

The bot in question is dubbed DARwIN (aka Dynamic Anthropomorphic Robot with Intelligence) and is the product of the Robotics and Mechanisms Laboratory at Virginia Tech (RoMeLa). DARwIN can walk, albeit at a snail's pace, and stand up if it falls after some gyrations that resemble hip-hop moves.

The first DARwIns were bespoke creations whose skeletons and electronics were exposed, which made them safe for lab use but unsuitable for tests in less-friendly environments. The RoMeLa team therefore decided last year that they could advance the 'bot's development by making it easy for other robotics researchers to put DARwIn through its paces.

That realisation led to the creation of DARwIN-OP, the Open Platform Humanoid Robot for Research and Education. The platform offers all the software, instructions and CAD files required to build your own world cup winner in a mere 2.1 megabyte Sourceforge download. The results, below, are a knee-high bot whose innards are sufficiently shielded that curious fingers won't be snagged.

The Reg saw DARwIN demonstrated today (at the VMworld 2012 closing keynote) by Virginia Tech's Dr Dennis Hong and can report the 'bot is cute as a button, appearing like a cross between a shy pet and a human toddler. Dr Hong even showed video of his real, entirely human, toddler son playing with DARwIn in complete safety.

Before you rush to download the files yourself, dreaming of either a robotic babysitter or World Cup glory, we need to report that Hong said a complete DARwIN will set you back US$18,000. Even at that price they're hard to find, as the one approved retailer, Robotis, is out of stock. DIYers can have a go at making their way through the construction kit, but will need access to all sorts of parts and tools. ® 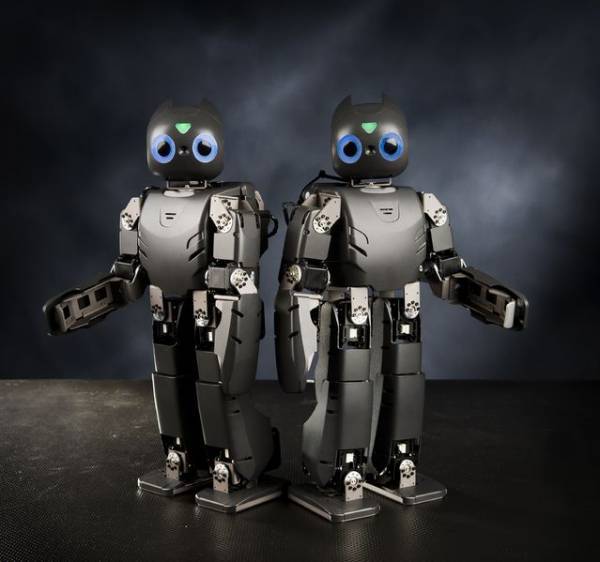 A pair of Dynamic Anthropomorphic Robots with Intelligence

The author travelled to VMworld 2012 as a guest of VMware.