With all of the relatively cheap computing power available today, and with the expanding focus from traditional supercomputers to clusters that can run simulations or big data workloads, you'd think that the HPC market would be growing like gangbusters. Not so.

That's the latest news from the box counters at IDC. But there's good news, as well: in terms of sales, the HPC space helped prop up the rest of the server racket in the second quarter of this year, and looks to do even better in the second half.

In the quarter, sales of server iron specifically earmarked for use in high-performance systems running technical workloads actually took a bit of a dip, falling nine-tenths of a point to $2.4bn. As El Reg reported last week, global server sales as reckoned by IDC fell 4.8 per cent to $12.6bn, with a shipment decline of 3.6 per cent.

The shipment decline in the HPC racket was much more dramatic, plummeting a stomach-lurching 21 per cent compared to the year-ago period, with a total of 22,998 machines out the door in the quarter. However, thanks to steady peddling of large petaflops-class iron, average selling prices in the HPC sector rose even as revenues stalled.

Overall, however, HPC revenues grew a lot less than the overall server market. HPC system sales are tied very closely to new processor and interconnect announcements, but are not solely driven by them.

The high-end of the HPC market – machines that cost $500,000 or more – did particularly well in the second quarter, with revenues up 21.8 per cent to $1.17bn. Cray, Fujitsu, and Silicon Graphics all notched up some big installations in the second quarter, with their respective revenues in the HPC segment up 43.7, 33.5, and 10.3 per cent, respectively. Chinese supercomputer makers, who had benefitted from a boom in supercomputer spending, saw mixed results in Q2, with Inspur enjoying a 22.5 per cent spike in sales, but Dawning seeing only a 1.9 per cent bump. 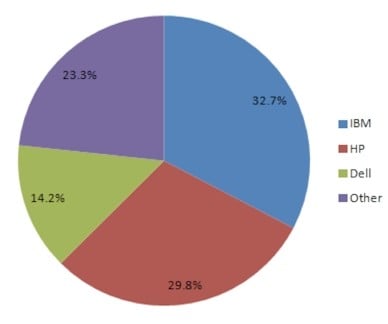 Vendor market share in the HPC racket during Q2

"HPC technical servers, especially supercomputers, have been closely linked not only to scientific advances but also to industrial innovation and economic competitiveness," explained Earl Joseph, program vice president for technical computing at IDC, in a statement accompanying the figures.

"For this reason," he said, "nations and regions across the world are increasing their investments in supercomputing even in today's challenging economic conditions. We expect the global race for HPC leadership in the petascale-exascale era to continue heating up during this decade."

Vendors are sure hoping this is the case. With exascale machines costing potentially billions of dollars to develop and build, the governments of the world may not be in a position to indulge. Outside of China, of course, which is sitting on a few trillion US greenbacks and can do whatever it wants.

As has been the case for many years, IBM and HP are fighting for dominance of the HPC server segment, with IBM winning some big deals at the high end and HP installing lots of clusters in the midrange. IBM has just under a third of the market, and HP is close behind, followed by Dell with its 14.2 per cent share of the HPC server revenue pie. All other vendors are crammed into the remaining 23.3 per cent slice.

Looking ahead, IDC's box counters are still saying that the second half of 2012 will be a solid one for HPC iron, and they are undaunted by the fact that in the first half of the year the market saw revenues decline by 1 per cent and shipments fall by 11 per cent.

IDC is sticking by its previous forecast of 7.1 per cent revenue growth in 2012, to $11bn, following on from a record-breaking $10.3bn in sales last year. They continue to project rosy times for HPC server sales even further out, saying that over the next five years the market will see a 7.3 per cent growth rate (compounded annually), hitting $14bn by 2016. ®