Only attacks Tasmanian Devil but may help target human cancers

Scientists investigating a cancer that is killing off the world's largest carnivorous marsupial, the Tasmanian Devil, have found that the disease is effectively immortal.

Tasmanian Devils are about the size and weight of a very large domestic cat, but possess jaws with unusually strong crushing power and make impressively nasty hissing growls.

Despite that armoury and status as an apex predator in the Australian island state Tasmania, Devils have been dying off very rapidly. Up to 90 per cent of the population has succumbed to a cancer that eats away at their faces. Scientists have therefore striven to find a vaccine to protect the animals against the cancer, as there simply aren't that many marsupials in the world full stop, while predator carnivore marsupials are rarer still.

That effort has not, to date, succeeded and Devils keep dying. A new study, Telomere Dynamics and Homeostasis in a Transmissible Cancer explains why: the cancer in question is just about immortal.

The study labels the cancer Devil Facial Tumour Disease (DFTD) and notes it is unusually tenacious, as:

“Since their emergence in 1996 DFTD cells have undergone continuous division and propagation in thousands of devils without exhausting their capacity for replication and compromising their genomic stability. In contrast, normal human somatic cells display a finite capacity for replication, known as the ‘‘Hayflick limit’. That is, after a given number of divisions, the cells exhaust their replicative potential due to shortened telomeres and enter a state known as replicative senescence.” 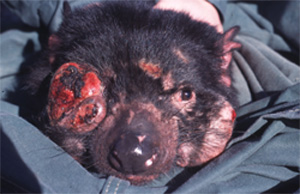 The gruesome effects of DFTD.

Telomores, the paper explains, are “ribonucleoprotein complexes at the ends of eukaryotic chromosomes essential in regulating cell lifespan”. The researchers have elsewhere offered the analogy that telomores are like the plastic wrapping at the end of shoe laces that prevent fraying. In DFTD the telemores stop the cells from ageing, allowing the cancer to continually mutate and find new targets.

The good news is that the researchers who penned the paper feel “this clonally transmitted disease provides an unprecedented opportunity to study cancer cell evolution and progression in vivo.” As human cancers also have telemores, and they are known to be a factor in maligancy, the researchers are hopeful that work to help the Devils will also prove useful in treatments for human cancers.

Any such therapy is of course a way off. For the time being, you have little worry about from DFTD, as the paper notes it is transmitted “... by biting during social interactions” and there is no indication it is transmissible to humans. If you try to snog a Tasmanian Devil to test that theory, El Reg feels you'll deserve whatever you get. ®

If you absolutely must keep using those proprietary formats, walk this way
Applications19 Aug 2022 | 17