As NASA's Voyager probes complete their 35th year of operation, Voyager 1 has sensed a second change in the surrounding expanse of obsidian nothingness - just as scientists predicted would happen before the craft enters interstellar space. 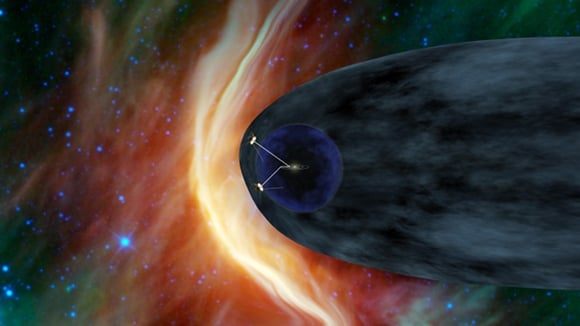 Voyager 1 and 2 in the heliosheath Credit: NASA/JPL-Caltech

Since June, Voyager 1 has detected galactic cosmic rays in rapidly escalating amounts, one of three criteria that must be satisfied before boffins are sure the probe has left the heliosphere, which is the outer shell of the bubble of charged particles around our Sun.

The final change in Voyager 1's environment that NASA's Jet Propulsion Lab's scientists hope to see soon is the direction of the magnetic fields, which will change from running east-west to running north-south. The team is crunching the latest numbers received from the probe - now at least 11.1 billion miles from Earth - to see if this may in fact have already happened.

The craft's twin Voyager 2 was launched in August 1977, but its slower pace means it's slightly behind in crossing the boundary of our solar system. Nevertheless, it's NASA's longest-operating craft ever while soaring through space for 35 years. 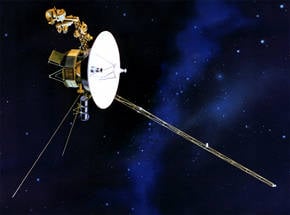 Voyager 1 is the furthest manmade craft
from our home world

The Voyagers were first blasted off to investigate our planets, touring Saturn and Jupiter in their original five year mission. However, even before their launch, NASA hoped they'd do more and equipped them with a Cosmic Ray Subsystem, which along with other things could measure the interstellar spectrum of cosmic rays.

"Even 35 years on, our rugged Voyager spacecraft are poised to make new discoveries as we eagerly await the signs that we've entered interstellar space," Ed Stone, Voyager project scientist at the California Institute of Technology, said proudly.

Voyager 2 discovered the puzzling hexagonal jet stream in Saturn's north polar region before becoming the only spacecraft to visit Uranus and Neptune, spying the tipped magnetic poles of the planets, and the geysers on Neptune's frozen moon Triton.

Although it was launched 16 days after its twin, Voyager 1 reached Jupiter and Saturn first and witnessed the volcanoes of Jupiter's moon Io, the kinky nature of Saturn's outermost main ring, and the deep, hazy atmosphere of Saturn's moon Titan. The craft also took the mission’s last snapshot - the famous solar system family portrait that showed Earth as a pale blue dot. 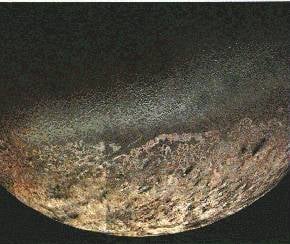 Right now, Voyager 1 is heading north while Voyager 2, at least 9 billion miles from the Sun, is moving south. It typically takes 16 hours to beam data back from Voyager 1, which has a 59MB tape store to hold information in case it cannot establish a connection with engineers back home.

"We continue to listen to Voyager 1 and 2 nearly every day," Suzanne Dodd, Voyager project manager at NASA's Jet Propulsion Laboratory, said. "The two spacecraft are in great shape for having flown through Jupiter’s dangerous radiation environment and having to endure the chill of being so far away from our Sun."

Dodd and her team reckon the two ships have enough power to keep going and send data back until 2020, or maybe even 2025, giving Voyager 1 up to 13 years to explore interstellar space.

"Mission managers are eagerly anticipating the day when they break on through to the other side – the space between stars," Stone said. ®