Still caged in a lab at Pentagon's mad scientist bureau... FOR NOW

A terrifying legged robot has beaten its own speed record and bagged a world first by reaching 28.3 mph (45.5km/h) over 20 metres in a lab trial. The beast is currently locked up in the DARPA research facility.

The galloping bot is officially faster than the fastest human - Usain Bolt who reached 27.3 mph (43.9km/h) in 2009, setting the top limit of human speed.

The metal-legged robot, called "Cheetah", is a project of Boston Dynamics and funded by the US's Defense Advanced Research Project Agency (DARPA). The metal-legged runner is a step on the way to making rough terrain military robots that could traverse ditches and walls that wheels and caterpillar tracks can't.

But legged robots are much slower than bots on wheels and so the team have been working on improving the speed and resilience of robots with legs. The Cheetah is the fruit of the research and the fastest legged robot to date. The new speed record breaks Cheetah's previous speed record of - 18 mph (29km/h) - set in March 2012.

Improved algorithms controlling the sequence of the leg movements and a stronger hydraulic pump powered the robot to its new record, say the bot-boffins behind the Cheetah.

Designing the swing and lift of the legs is the most complicated bit, and lifting the legs takes the majority of the robot's energy.

The robot is closely based on the cheetah it is named for - mimicking its back muscles, leg positions and, crucially, timing. 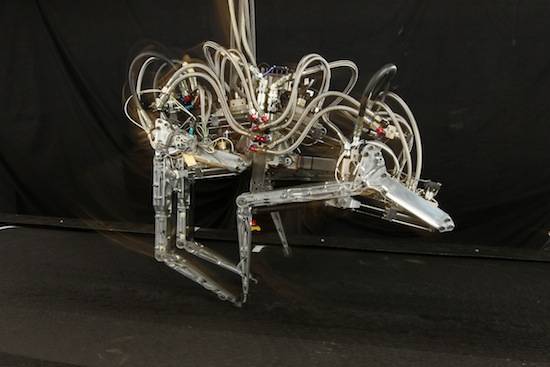 DARPA's Cheetah robot borrows its build from a cheetah, though looks more like a termite. Picture credit: DARPA

Our Cheetah bot borrows ideas from nature’s design to inform stride patterns, flexing and unflexing of parts like the back, placement of limbs and stability. What we gain through Cheetah and related research efforts are technological building blocks that create possibilities for a whole range of robots suited to future Department of Defense missions.

Unfortunately the robot doesn't look much like a Cheetah: the general aesthetic is more hump-backed Skeletor-termite than a big cat. Maybe that will change in later iterations.

There's still a long way to go before the Cheetah can be turned out into real world situations: the bot was only tested on a treadmill, and the hydraulic engine powering Cheetah is held off-board and connected by a stick. ®