Futuristic free thinking to save both money and space

Airbus has detailed its plans for the future of air travel in 2050, when megacities and rising fuel costs will make flying a very different kettle of (flying) fish.

The company's "Smarter Skies" report has been two years in the making, using interviews within the aviation industry and with designers to come up with radical new aircraft and infrastructure designed to cope with the future cost of fuel and the limits placed on airports by the growth of megacities.

"Our engineers are continuously encouraged to think widely and come up with 'disruptive' ideas which will assist our industry in meeting the 2050 targets we have signed up to," said Charles Champion, Airbus VP of engineering in a statement.

"These and the other tough environmental targets will only be met by a combination of investment in smarter aircraft design and optimizing the environment in which the aircraft operates. That is why our latest Future by Airbus Smarter Skies concepts focus on not just what we fly but, how we may fly in 2050 and beyond."

Aircraft will become totally recyclable, the report predicts, using interior fittings that are grown from vegetable matter and which will be self-cleaning and repairing. Bulkheads could be made of materials that can become transparent – which might cause some people with a fear of heights some problems – and the wings could change and adapt to different wind conditions for maximum efficiency.

Advances in design and materials science will make aircraft engines much more reliable and reduce the need for servicing, so they can be built into the hull of the aircraft for maximum aerodynamic efficiency. Airbus predicts that with the right incentives, biofuel will be used for 30 per cent of flights by 2030, which could rise to 50 per cent by 2050. Solar power and fuel cells could also augment the engines. 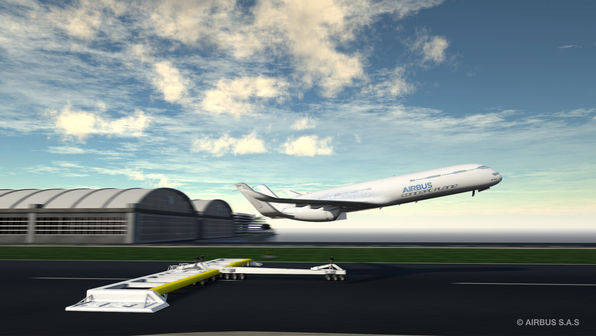 In 2050, flying begins with flinging

Once you're on board and strapped in, Airbus proposes that the energy needed to get you aloft could be cut drastically by using a catapult systems similar to that used on aircraft carriers today. This "renewably powered, propelled acceleration" system would be low-G enough for everyday travelers and would allow for shorter runways to save space – although the graphic of the takeoff angle suggests a lot of spilled drinks and freefalling cabin crew. 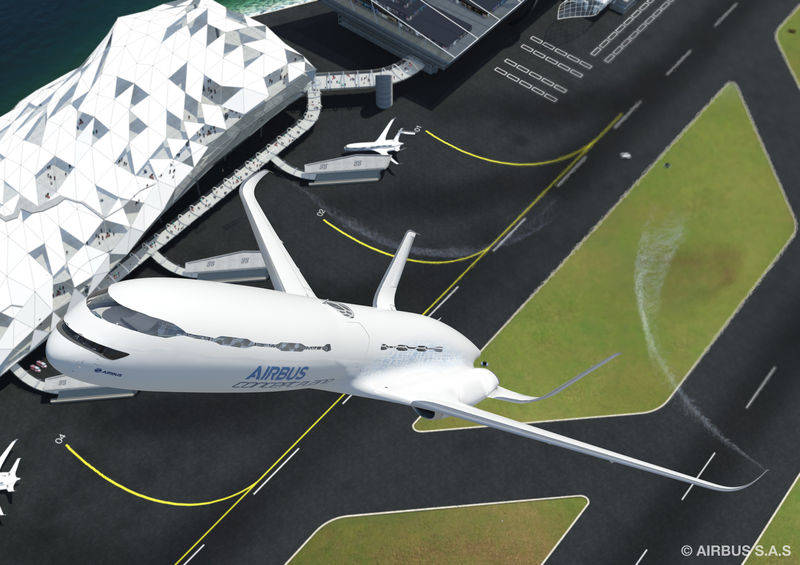 Once aloft the aircraft will use predictive software to work out the most fuel-efficient route to its objective, and on busy flight paths aircraft would be coordinated to fly in formation to save fuel, just as birds and military aircraft do. The air vortices from the wings of the lead craft will provide free lift for those aircraft following, although the risk of collision might unnerve some passengers. 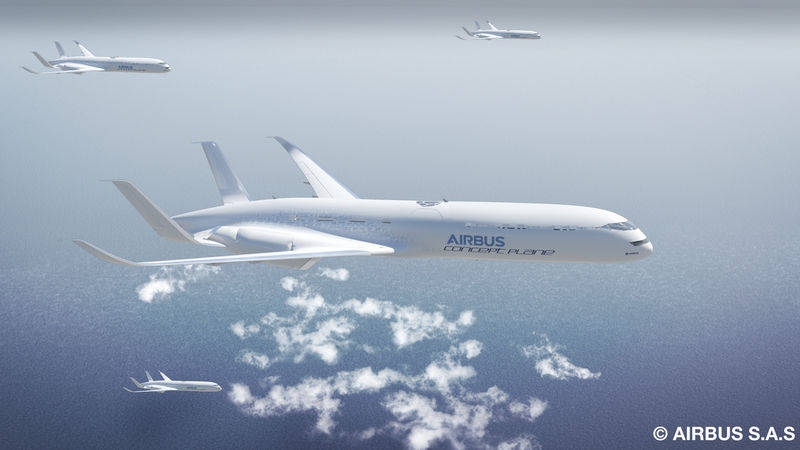 Taking a tip from the animal kingdom (click to enlarge)

In order to save yet more energy and reduce noise pollution, Airbus suggests allowing planes to power down their engines well before landing and glide onto the runway on momentum alone. This is possible today: in 2001 an Airbus A330-243 ran out of fuel mid-Atlantic and glided over 60 miles to land in the Azores. Aviation authorities, however, insist on powered landing for safety reasons.

It is possible that future landings will also be more complex. Airbus postulates that aircraft could land directly on a moving platform which would then shuttle it off the runway and to the airport building without needing to restart the engines. Since this would require every aircraft and airport to be outfitted with such a system, the European plane manufacturer admits this is quite a long shot.

All this futuristic stuff is good enough for 2050, but Airbus says significant savings could be made right now using currently available technology. Airbus estimates that if the current crop of air traffic management systems were properly used, the average flight time would be 13 minutes shorter and the industry could save nine million tons of fuel a year. ®