A prominent British Arctic scientist and researcher says that the continued and accelerated melting of the polar sea-ice cap is not only a result of climate change, but is also a massive contributor to it.

To explain in an overly simplistic nutshell, sea ice is reflective, bouncing solar energy back into space. When it melts, the darker open sea absorbs more of that energy, increasing ocean temperatures.

How much more? According to Professor Peter Wadhams of the University of Cambridge's Polar Ocean Physics Group, that increased absorption has an effect that's "the equivalent of about 20 years of additional CO2 being added by man."

In an interview with the BBC, Wadhams said that in his opinion, the Arctic ice cap is "heading for oblivion."

If you've been following Arctic ice science for the last few years, Wadhams' name is likely to be a familiar one – he's been attacked by some observers and supported by others.

Interestingly, although both believers in and skeptics of anthropogenic global warming (AGW) often fault one another for CO2-industry connections or research-grant competition, Wadhams swings both ways. He cut his teeth working for the oil industry, and received support from BP from 1976 until 1992 for his research at Cambridge's Scott Polar Research Group (SPRI). On the other side of the equation, he has loudly tussled with the UK's Natural Environment Research Council (NERC) for grant support. 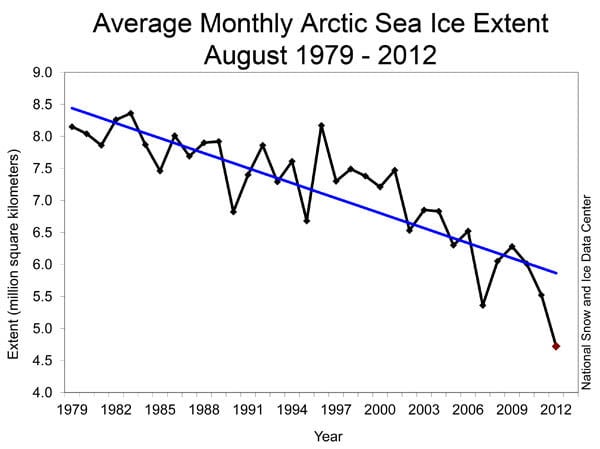 The August Arctic ice cap has had its ups and downs in the last 30-plus years, but the trendline is rather clear

But whatever you think of Wadhams' bona fides, he can't be faulted for the data and analysis provided by the US National Snow & Ice Data Center, with which he is not affiliated. According to NSIDC's latest report, issued Wednesday:

Following the new record low recorded on August 26, Arctic sea ice extent continued to drop and is now below 4.00 million square kilometers (1.54 million square miles). Compared to September conditions in the 1980s and 1990s, this represents a 45% reduction in the area of the Arctic covered by sea ice. At least one more week likely remains in the melt season.

Of particlar interest in the NSIDC report is that multi-year ice – ice that has survived more than one year of the seasonal melt-refreeze cycle – is melting along with the Arctic cap's more-vulnerable first-year ice.

The last few summers, NSIDC reports, have seen increased losses in multi-year ice. "Between mid-March and the third week of August," the report concludes, "the total amount of multiyear ice within the Arctic Ocean declined by 33 per cent, and the oldest ice, ice older than five years, declined by 51 per cent." 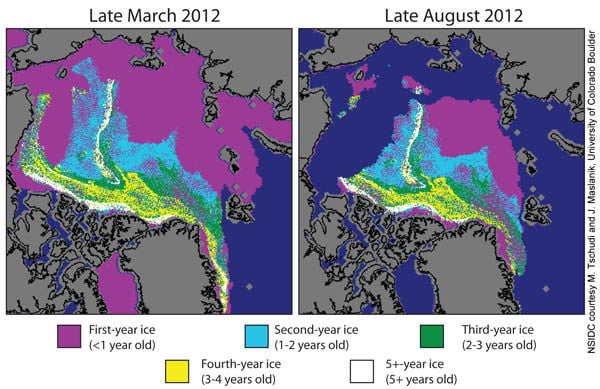 As hardier multi-year ice melts, it's replaced in the winter by more-meltilicious first-year ice

The smaller the Arctic sea-ice extent, the more solar energy will be absorbed by the ocean. And according to Wadhams, the greater the CO2 equivalent of global-warming potential.

"The difference, the extra radiation that's absorbed is, from our calculations, the equivalent of about 20 years of additional CO2 being added by man," Wadhams concluded.

Of course, if you're an AGW skeptic, you doubt that CO2 caused by human activity has had a significant effect upon the Earth's global climate. But if you're an AGW believer, that's a sobering conclusion, indeed. ®