Probes turn grub and other stuff into USB keyboard

Pics Sparkfun - a supplier of components, widgets, doohickeys and other frivolities - is now making its own hardware in the form of the Makey Makey, which turns just about anything into a keyboard.

The Makey Makey started out as a Kickstarter project from a couple of MIT Medialab types, who used the money raised to commission Sparkfun to make the device: a simple circuit board that turns stuff into a USB keyboard.

But the development reflects a trend towards hardware hacking, as creating one's own electronics gets as easy as knocking some Java into an app. 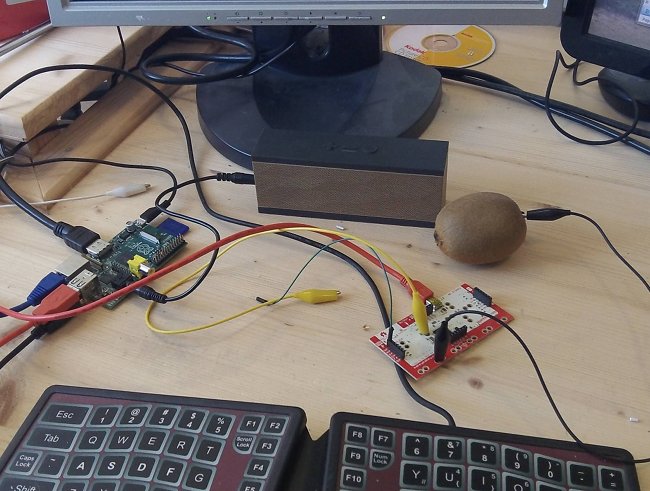 The Makey Makey costs $40, and you'll cough up $50 for the "deluxe kit" which comes with a roll of 5mm copper tape and a multitude of jumper cables and crocodile clips – far more than one would need for any reasonable project. Plug the box into a USB socket and it lights up as a keyboard, short any of the dozen or so connections (even with high resistance from, say, a banana) and the Makey Makey sends a key press over the USB.

There are shorts for mouse left, right, up, and down, and clicking both buttons, as well as space and half a dozen letter keys, but the board is based on Arduino so can be reconfigured to change the keys emulated, and there are half a dozen switching outputs for those interested in delving into the firmware, but that's not necessary to makes use of the hardware.

While the Makey Makey has been demonstrated creating banana pianos and playdoh gamepads we had in mind something a little more practical, so with the aid of a little conductive paint and some copper wire we were able to create a touchable desktop for control of the Pi's media player, painted onto the desk itself. 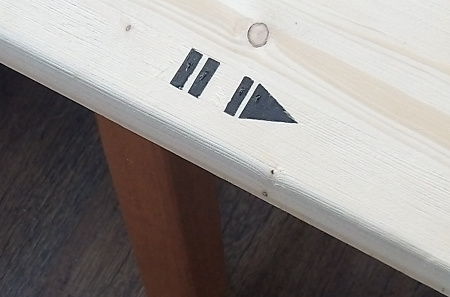 Wax is OK, but don't varnish or you'll never hear your music again

The Makey Makey requires a loop, so to use the banana piano one has to grasp the earth wire in the other hand. For our example we didn't want that, so paired up the panels so a finger could short between them. Sadly it tuned out our wood was a little too conductive and the 3mm gap between the panels wasn't isolating enough - a wider gap works, though one may need two fingers to use it.

But the beauty is to be able to create a working interface out of anything, without so much as picking up a soldering iron, which makes hardware hacking about as difficult/easy as playing with Lego.

The Makey Makey exists, just like the Pi, because intelligence is getting really cheap. Sparkfun only started eight years ago but its name is already being hijacked in the popular search engine results. These days it employs 135 people, half of whom are packaging and assembling while the other half are working out what works. The Makey Makey is Sparkfun's first foray into contract manufacturing, though it has high hopes for the field, as well as pushing into the education market.

Which is ironic given our own equivalent, Mindsets (from whom we obtained the conductive paint) started out manufacturing and supplying bits to student teachers, some of whom qualified, leaving Mindsets supplying teachers, and thus schools, and thereafter the general public.

Both companies supply unusual components as well as kits for specific tasks. Sparkfun's best seller is the wonderfully unspecific "Inventor's Kit for Arduino" – a snap together set for seeing what can be done – while Mindsets has more emphasis on smart materials, but both drive the imagination to wonder what might be possible.

The Makey Makey is a little pricy for a keyboard replacement, one could cut up a real keyboard for a lot less money, but that would take time and energy and probably end up in a cupboard somewhere with the other unrealised dreams. Bare boards do encourage experimentation, and the Makey Makey is quick to reward and combines well with a Raspberry Pi even if it costs a bit more.

Speaking of which ... it's time to paint some larger controls, and wire up the sound system; this touch-controlled sideboard isn't going to make itself. ®

Updated Double the RAM but not double the price