Curiosity Rover has left a mark on Mars that is visible from space. The rover's maiden journey across the Red Planet has left tire tracks that have been photographed by the high resolution camera on NASA's Mars Reconaissance Orbiter.

The snap released by NASA today shows where the tyres have scuffed the red surface dust off the darker basaltic sand beneath. The Mars rover is visible at the end of the tracks and the dark smudge where the tracks start is the landing spot of the Rover, showing where the impact also blew off surface dust, leaving a dark mark. 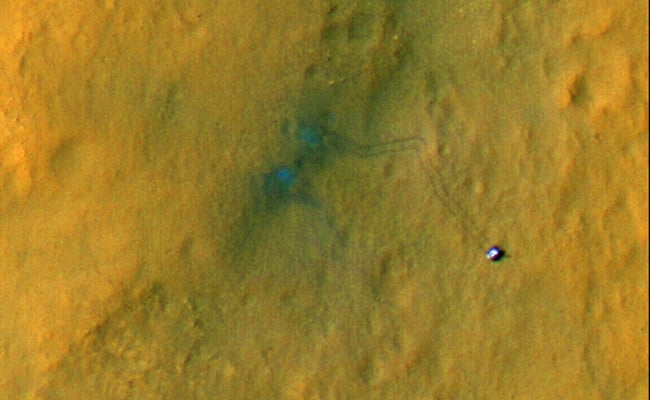 The tracks of the Curiosity Mars Rover seen from space. Picture credit: NASA

The tracks map the rover's first journey since landing - a 109m trip on Wednesday. Curiosity snapped its own tracks from its onboard camera on the day. The orbiter picture gives a more zoomed out view.

The Rover is now testing out the kit in its 2.1m robotic arm - practising drilling and scooping, as well as checking that it can insert samples back into the correct portals on its body - in tests that will take six to 10 days. Astro boffins at NASA want to make sure everything is still working after the rover's impact with the Red Planet. Daniel Limonadi of NASA's Jet Propulsion Laboratory said:

We will be putting the arm through a range of motions and placing it at important 'teach points' that were established during Earth testing, such as the positions for putting sample material into the inlet ports for analytical instruments. These activities are important to get a better understanding for how the arm functions after the long cruise to Mars and in the different temperature and gravity of Mars, compared to earlier testing on Earth.

After the tests are complete, Curiosity will travel for a few weeks eastward toward Glenelg, a rock formation just east of the rover's landing site. The science team selected that area as likely to offer a good target for gathering Mars dust. Curiosity will drill into a rock to gather samples and then analyse them with its inbuilt tools.

The tracks themselves are also interesting to NASA, which will observe them as time passes for information about how the surface changes over time, and how dust is eroded and deposited. ®