IDC's Storage Tracker bloodhounds have tracked the vendors across the market in the second quarter and rated them, and it looks like not a lot has changed in the hierarchy of the storage pack. EMC's market share is rising, again. Most everybody else is down, again.

For external disk storage compared to a year ago:

The chart shows the overall picture and quarterly trends. 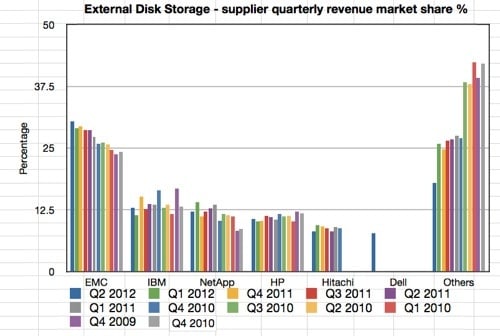 So EMC can bark away while the other vendors can make regretful whimpering noises. HP at least is doing better – looking at its three most recent quarters – and IBM is up sequentially too. Maybe Big Blue can now cling on to second place after having exchanged that rank with third-placed NetApp in the last two quarters.

The total external disk market was worth just under $6bn in the quarter, 6.5 per cent up on a year ago, economic issues notwithstanding. There was strong demand in emerging regions of the world plus increased demand for mid-range systems – the ones with prices from $25,000 to $249,999. SAN is growing faster than NAS by the way, witness an 8 per cent rate versus a 2.5 per cent rate.

When IDC looks at total disk storage, adding in storage shipped as DAS with servers, the picture is of EMC, HP, IBM and Dell selling more than a year ago but NetApp and the "Others" selling less. The chart shows the overall picture again: 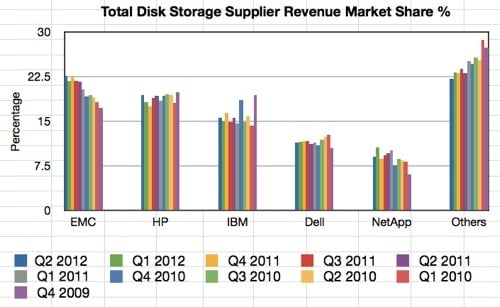 Looking at the chart it's noticeable that EMC's growth isn't trending up as strongly as in external storage. HP has had three quarters of growth. IBM looks to have two opposing trends; peaks which are going down, and a larger number of non-peaks which are trending up. Dell's most recent three quarters show a fall, though. NetApp has become variable and the Others category is trending down.