As expected, Microsoft officially launched the latest iteration of its developer tools on Wednesday, including Visual Studio 2012, .Net 4.5, and the surprise debut of a new member of Redmond's Express family of free IDEs, this one for building Windows desktop applications.

S. Somasegar, corporate VP of Microsoft's developer division, talked up the new tools in a keynote delivered at the Visual Studio 2012 launch event in Seattle, which was simulcast via streaming video.

Most of the new tools have actually been available for download by subscribers to Microsoft's MSDN developer program since August 16, but now that the product line has officially launched, they should begin shipping to the retail channel.

"We have a huge line-up of platform releases from Microsoft this year," Somasegar said in a statement, "from Windows 8 to Windows Phone 8 to Windows Server 2012 to Windows Azure to SQL Server to Office 365, all of them enabling you to create or modernize really compelling apps. And Visual Studio 2012 is at the center of this."

Somasegar said Microsoft had prepared a series of more than 60 videos to acquaint developers with the capabilities of the new version, which will be available for streaming on the VS2012 launch website beginning Wednesday afternoon, along with video of the launch event keynotes and breakout sessions.

In addition to highlighting the Visual Studio products we already knew about, Somasegar used the occasion to make a few new announcements, as well. The first was that although VS2012 has only officially just launched, an update pack for the suite is already in the pipeline.

"We're also not standing still with this release," he said, "but rather are committed to continuously delivering value to you as part of regular updates to Visual Studio."

The first such update, he said, will be available as a community technology preview (CTP) later this month and will ship by the end of the year. That release will add a number of significant new features for various developer niches, including improved support for SharePoint development, new DevOps capabilities, better manual testing capabilities, and a variety of productivity enhancements.

There was no word on whether Microsoft plans to continue to work on Visual Studio 2012's new UI, which hasn't won much love from developers. An update during the beta period added a few hints of much-needed color, but there's still room for improvement.

In an unexpected turn, Somasegar also announced that Visual Studio 2012 Express for Windows Desktop, Microsoft's free IDE for building traditional applications based on .Net and Windows APIs, is now available for download.

Redmond first teased its new Express line-up in May, but at that time the only product mentioned was one for building apps for the Windows Store and Windows 8's new, touch-centric Start Screen. That led many to speculate that Microsoft no longer planned to offer a free IDE for building desktop applications, and that folks who wanted to make "big boy apps" would have to pay.

Turns out that's not the case, and VS2012 Express for Windows Desktop actually offers desktop developers more capabilities than did earlier Express versions. 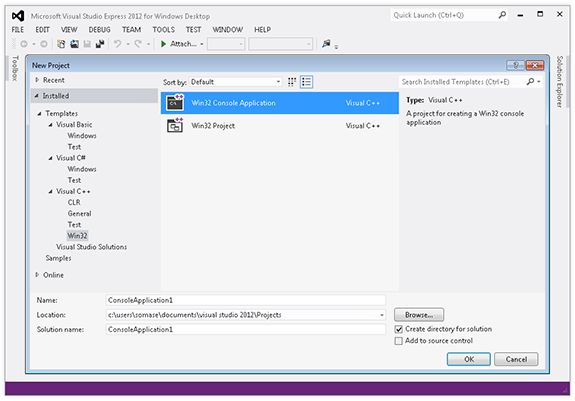 It's finally here! Desktop hackers won't have to shell out for VS2012 after all

With Visual Studio 2010, the Express IDEs for C++, C#, and Visual Basic were all offered as separate downloads. Express for Windows Desktop now supports all three languages from within the same IDE, and developers can use any combination of the three within their projects.

The compilers for all three languages have been beefed up, including support for the new "async" and "await" keywords in Visual Basic and C# and improved compliance with the C++ 11 standard.

Now that the Visual Studio launch event has come and gone, it seems likely that we won't hear much more about Windows Phone developer tools until Microsoft's Build 2012 developer event, set to take place in Redmond at the end of October. ®

Trying and failing to update Visual Studio? You aren't alone