A species of monkey previously unknown to science has been discovered in Africa: and boffins say that it has an "extensive" bright blue bottom which rivals that of the largest and most colourful known monkeys on Earth. 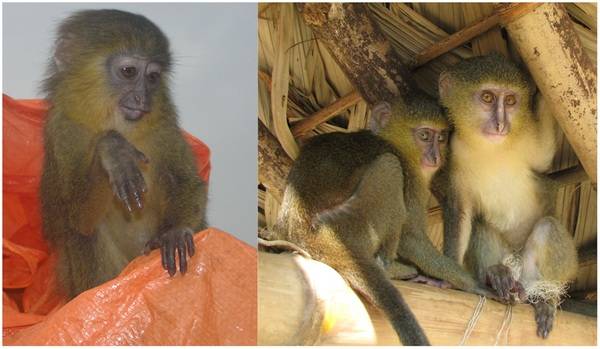 The new monkey was first sighted by scientists in 2007, when boffins found one being kept as a pet in the town of Opala in the Democratic Republic of Congo. It transpired that the unusual monkey was well known to local people, but had never before been catalogued by scientists. Following some research, the new species - dubbed "lesula" - has now been announced to an astonished world.

The lesula, which is the first new monkey found in Africa for 28 years, is remarkable in particular for its vibrant colouring. It has a pink face, golden throat, massive whiskers and a vertical white stripe up its nose, which gives it some resemblance to the already well known owl-faced monkey.

Perhaps the major claim to fame of the lesula, however, is its enormous blue arse. The discovering scientific team describe this feature thus:

The lesula's blue buttocks, then, are not merely bigger than those of any other monkey in its family: they are such as to rival the enormous and glaring posterior of the Mandrill, the largest monkey in the world. Eminent old-time boffin Charles Darwin wrote that in his opinion:

"No other member in the whole class of mammals is coloured in so extraordinary a manner as the adult male mandrills."

Except, now, the lesula - and as the new contender is smaller overall, its mighty blue arse may be presumed to be even more striking in effect.

Apparently the lesula, though not numerous, is not in massive danger of extinction right now. However the discovering scientists caution that it could be soon, as it is hunted for its meat by local people.

"The challenge for conservation now in Congo is to intervene before losses become definitive," say John and Terese Hart, who led the investigation team, in tinned quotes. "Species with small ranges like the lesula can move from vulnerable to seriously endangered over the course of just a few years."

Extremely complete boffinry detail on the lesula - including highly detailed but perhaps rather off-putting pics of the possibly record-breaking azure buttock area, which as a mainstream publication we have chosen not to republish - can be seen here for free courtesy of online scientific journal PLoS ONE. ®