Codethink jumps into the ARM server fray with Baserock Slab

A Marvell-ous cluster in a box

The crafty engineers at embedded software development house Codethink assembled an ARM-application build server for their own use this June, and have now decided that you might want one, as well – so starting this week they'll sell you a commercial version of that box called the Baserock Slab.

The reason for Codethink's entry into this biz is simple: for all the talk about ARM-based servers out there, it's pretty tough to get your hands on a machine with enough oomph to both handle build server tasks and be a deployment box for scalable Linux applications.

That's what Gabriel Vizzard, VP of business development at embedded software development house Codethink, says is the current state of ARM serverage. And that's why the company's engineers, who know a thing or two about iron, built their original box, which is now on sale.

The Baserock Slab is based on Marvell's Armada XP processor, and uses a system-on-module design that welds everything you need for a multiprocessor cluster onto a board, including main memory, links out to inter-node networking, and server management modules. It's a compact design, and one that is the shape of things to come for both low-power Atom and ARM servers that will be commercialized in the coming years from myriad vendors.

The initial Baserock Slab servers are based on the quad-core MV78460 processors from Marvell, which acquired Intel's Xscale ARM chip business a few years back and is determined to have a go at the ARM server racket after having some success peddling ARM chips for embedded and client devices.

The initial Baserock servers are based on the A0 stepping of the "Sheeva" MV78460 processors, which run at 1.33GHz and support 2GB of memory per socket. Each of those cores on the Sheeva die implement the ARMv7-A core spec, and they have 32KB of L1 data cache and 32KB of L1 instruction cache per core and share 2MB of L2 cache memory on the die.

Each Sheeva ARM chip also sports the VFPv3-D16 floating point unit, which does single- and double-precision floating point math, cryptographic duties, and has accelerators that support the DES, 3DES, AES-128, AES-256, SHA-1, and MD5 natively in the transistors.

While the Sheeva ARM cores do 32-bit processing, the core has been tweaked to do 40-bit virtual memory addressing, and with the B0 stepping of the Sheeva processor, Codethink will be adding a 1.6GHz option that has 4GB of memory per socket. Larger main memory is possible, and very likely desirable by many customers – you just use normal 64-bit DDR3-1333 memory with 8-bit error correction in the server; nothing fancy.

This system-on-module is actually made by Cogent Computer Systems, an embedded system maker based in Rhode Island; it's the CSB1726 module, to be specific. At idle, this board, including main memory, burns about 12 watts. No word on what it does under load.

Each server node has an ST Microelectronics STM32F103 microcontroller on it as well, which does power management, system monitoring, and general I/O handling for the node. It monitors voltages and temperature for the nodes and the "warm swapping" of server nodes and their related storage.

A cluster in a box is more than just a server node, of course. Each Sheeva chip has two SGMII ports running at 1Gb/sec with the A0 stepping and at 2.5Gb/sec with the B0 stepping. These link out to a Marvell "Cheetah 3" 98DX5156 Layer 2/3 network switching fabric that is embedded on an adjacent board in the box.

Those SGMII trunks can be bonded for a maximum of 5Gb/sec of bandwidth coming out of the processor into the switching fabric, which links the eight nodes in the Baserock Slab system together and which also exposes four Gigabit Ethernet and two 10 Gigabit Ethernet ports to the outside world.

That Cheetah 3 managed switch chip from Marvell is no slouch, either. It can drive up to 24 SGMII ports at 2.5Gb/sec in full-duplex mode and can process 119 million packets per second of Layer 2 traffic at wire speed. It can do 4,096 active VLANs, supports Layer 2 multicast groups, and has jumbo 10KB frame support as well as integrated buffer and control memories. 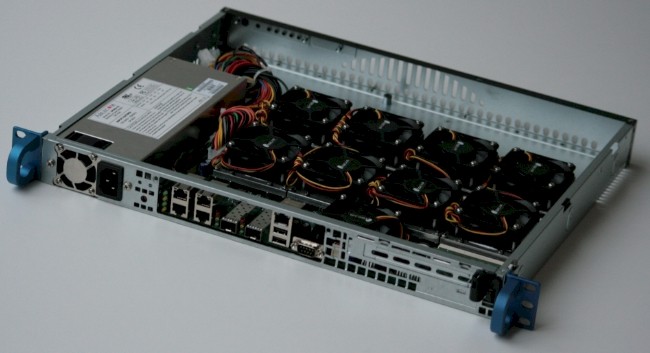 In addition to the eight server nodes in the Baserock Slab, the machine also includes an out-of-band management controller, which is itself based on a variant of the Sheeva processor from Marvell. In this case, it is the Armada 300, a single-core chip (number 88F6282 in the Marvell catalog) that is based on the ARMv5TE core design.

This processor has more modest 16KB L1 data and instruction caches and only 256KB of L2 cache for its one core; it has 1GB of DDR3-800 memory and 512MB of SLC flash memory soldered onto it and two 100Mbit management ports for talking slowly to system admins. This board burns about 4 watts at idle, and is also made by Cogent (part number CSB1724 if you want to buy it and build your own); it provides network boot services, upgrades to the BIOS on each node, and other common lights-out management features.

For storage, the Baserock Slab system uses Nocti MLC mSATA flash chips from OCZ as high-speed storage for a Linux operating system and for quick access to files for specific workloads. Codethink is offering 30GB, 60GB, and 120GB mSATA units for the server nodes and is using the Sandforce 2141/2181 SATA II controller to talk to the flash.

These flashes have a 0.1 millisecond seek time and can do 280MB/sec reading and 255MB/sec writing data; they burn 0.5 watts when idle and 1.7 watts when active, and have a mean time between failure of 2 million hours. Each server node has one mSATA unit by default. But there is one regular SATA ports hanging off each processor card if want to plug a real disk drive in for fatter storage. 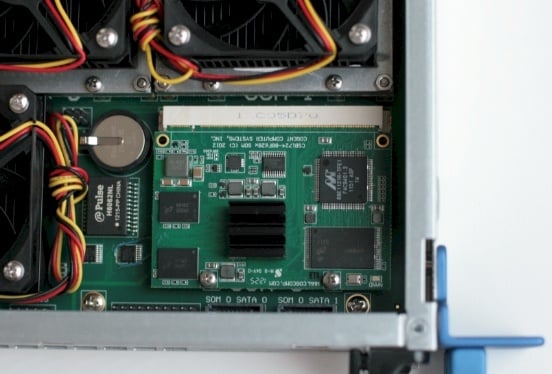 The Baserock Slab chassis is the standard 19 inches wide and 1U high, but is only 14 inches deep. That means you can pack them back-to-back and get as many as 76 units into a single rack. (It is not clear why it's not 84 units, but it is probably to leave room for aggregation switches at the top of the rack.) That is up to 2,440 cores of compute capacity into a single rack.

Codethink is just starting shipments of the Baserock Slab, which supports its own homegrown Baserock Embedded Linux variant for ARM servers as well as the stock Debian Linux if you want to roll your own. Red Hat Fedora and Canonical Ubuntu Linuxes, which are working on better support for ARM processors, will eventually be loadable on the Slab.

A fully loaded Slab, with all eight processors and the Baserock Linux stack, runs $10,000. That's $1,250 per node, including switching and systems software.

What everyone wants to know, of course, is how these compute Sheeva nodes and clusters stack up on real-world work. Being an embedded Linux software house, that's what Codethink cares about. And a lot of ARM developers have been compiling in an emulated ARM environment on top of x86 machines, which sucks.

"In our tests, we've found that native compilation on each core of the Armada XP at 1.33GHz is almost exactly twice as fast as a Core i7 core running at 3.4GHz and doing the same compilation under QEMU," says Vizzard.

While that's interesting for ARM developers, what we all want to know is how a LAMP stack, a Hadoop job, and Memcached all stack up on a node-by-node and cluster-by-cluster basis with native code running on both ARM and x86 iron (Atom, low-voltage Xeon, and regular Xeon would be nice). Hopefully Codethink will sit down with ARM Holdings and work to get such tests done. We are all waiting, not exactly patiently. Dell and HP, which are both monkeying around with ARM servers, don't seem to be in any hurry to do such rigorous tests. ®