The open source VirtualBox hypervisor is still alive and kicking after being absorbed into the Oracle collective more than two years ago, and has just gotten what the project calls a major update with release 4.2.

Oracle has also revved its Enterprise Manager 12c to turn it into a platform cloud manager for puffy infrastructure based on its own WebLogic Java application server.

As you can see from the release notes for VirtualBox 4.2, the project contributors have done a lot of work to make Windows 8 run more smoothly on VirtualBox, particularly the 3D graphics that can make all hypervisors a bit cranky and clunky. VirtualBox was tweaked to fix crashes when hosts were under "high memory pressure" running Windows 8 guests.

Bugs in SMP functionality for older operating systems like OS/2 were also fixed, and nested memory paging and context switching support was improved on Intel and AMD processors alike, which should make VMs run better.

The hypervisor also includes tweaks that allow for up to 36 virtual network interface cards to be configured per virtual machine when used in conjunction with an emulated version of Intel's ICH9 I/O controller hub. Prior to this release, the virtual chipset could only do eight virtual NICs per VM, so this is a big jump.

VirtualBox still has a virtualized PIIX3 chipset as an option, if you like that one, because it has been more stable for many customers. However, it is also more limited and doesn't support as many modern peripherals. 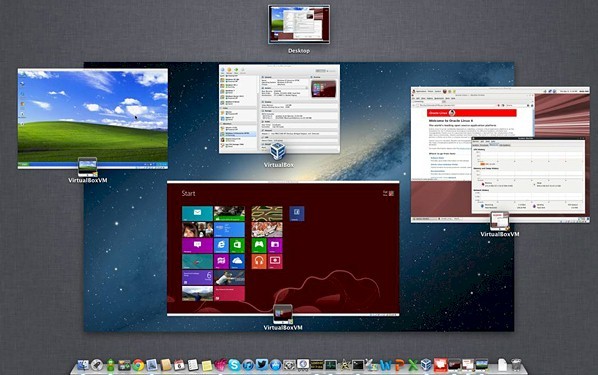 VirtualBox hypervisor is not a bare-metal or type 1 hypervisor, as they are called in the virty lingo, but rather a hosted or type 2 hypervisor that runs atop an operating system and then in turn hosts virtual machines that run independent operating systems.

With the 4.2 release, if you are running VirtualBox on a Linux host, you can now drop and drag from the host OS to the guest Linux OSes running inside VMs. In the future, this capability will also be added to other host-guest OS combinations.

The hypervisor can now fire up VM guests automagically at system boot time if they are running Linux, OS X, or Solaris; support for Windows guests for automatic VM boot is not yet ready.

There are a slew of bug fixes in the hypervisor, and VirtualBox will now run on the Nano X2 x86 chip from VIA Technologies. The Nano X2 supports Intel's VT-x virtualization extensions, but VirtualBox had no idea what the Nano X2 processor was before release 4.2.

Another neat feature of VirtualBox 4.2 is called "VM group", and as its name suggests, it lets admins and users perform commands on a group of VMs simultaneously. This can be done through the VirtualBox user interface or using a command line talking through the API stack for the hypervisor. You can group VMs by platform type, by project, by version, or any other metric you can think of. 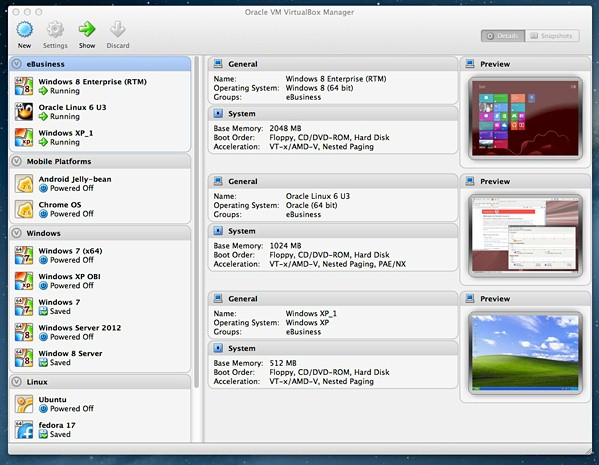 The improved management screen for VirtualBox 4.2

Oracle VM VirtualBox Enterprise costs $50 per seat, plus $11 per year for technical support and updates. You can get binaries (governed by the GPL v2 license) for free here for Windows, OS X, Linux, and Solaris hosts running on x86 gear.

So, separate question: who wants a VirtualBox hypervisor for ARM machines?

In conjunction with the new VirtualBox release, Oracle also kicked out Release 2 of its Enterprise Manager 12c control freak for physical and virtual servers and the systems software and applications that run atop them. Enterprise Manager 12c debuted last October, and with Release 2, Oracle is touting the ability of the tool to deploy its WebLogic Java application server in lickety-split fashion on top of its Exalogic x86-based server clusters to create a Java application platform cloud.

The updated 12c R2 control freak has automatic scaling, capacity metering, and capacity chargeback built-in, so you can do utility pricing for a private cloud run by the IT department or a public cloud run by a service provider.

Enterprise Manager 12c is available now and is free to customers who have licenses to Oracle operating systems or who buy Oracle server hardware. ®