Ready for my close-up, mister DeMille

How’s this for a close-up: an image that can differentiate between the different chemical bonds in an individual molecule? That’s what IBM’s Zurich research lab is claiming in a paper published in Science.

The paywalled piece is titled with the pizazz typical of science papers – Bond-Order Discrimination by Atomic Force Microscopy – but it’s worth browsing because the image is so cool. 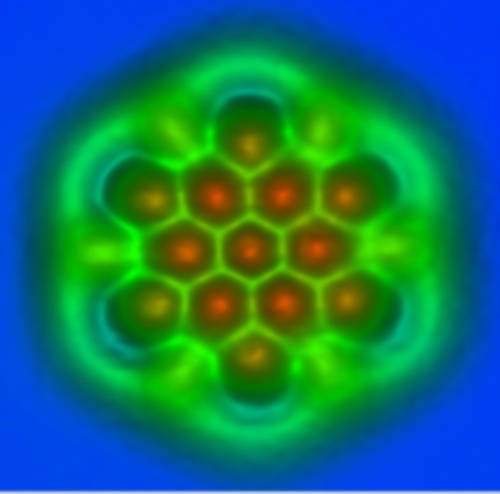 IBM's image of a nanographene molecule: the bonds at the centre involve more electrons and are shorter

than those at the edge. Image: IBM

Created with an atomic force microscope (AFM), the image shows a nanographene molecule and clearly visualises the bonds in the molecule, showing different lengths of bonds. The scientists say the imaging technique will help them characterise graphene, the wonderstuff of developments in electronics.

"This can increase basic understanding at the level of individual molecules ... in particular, the relaxation of bonds around defects in graphene as well as the changing of bonds in chemical reactions and in excited states were observed", IBM says.

To quote IBM scientist Leo Gross from its announcement: "We found two different contrast mechanisms to distinguish bonds. The first one is based on small differences in the force measured above the bonds. We expected this kind of contrast but it was a challenge to resolve.”

"The second contrast mechanism really came as a surprise: bonds appeared with different lengths in AFM measurements. With the help of ab initio calculations we found that the tilting of the carbon monoxide molecule at the tip apex is the cause of this contrast.”

Update: The original version of this story identified the image as showing C60. That has now been corrected. IBM imaged both nanographene and C60 "buckyballs". There are more images on Flickr, here.