Canonical, the distributor of the Ubuntu variant of Linux, wants to be on the cutting edge and be stable at the same time. And as anyone who has dated knows, that is a tough balancing act that few people can manage. But a new strategy from Canonical will line up the fast-changing OpenStack cloud control freak that is part of the latest Ubuntu Server distribution with the Long Term Support stable version of the company's Linux.

The way Ubuntu releases come out hasn't changed in many years, and as Mark Baker, server product manager at Canonical, explains in a blog post, it has generally worked well. For servers, a new Ubuntu Server release comes out every six months and is supported for 18 months. Every two years, the spring release is designated a Long Term Support release, which means Canonical agrees to keep it updated and supported for five years. While other Linux disties have been extending their releases to a decade, Canonical has stuck to this five-year support level for its most rugged server variant.

"Users often find that this predictable release schedule allows all areas of a workload lifecycle (from requirement, design, develop to deploy) to work well," says Baker. "However, sometimes a key piece of the stack is needed. This leaves users in a quandary: jump to a later (non-LTS) Ubuntu release, or find something that helps solve the problem, building on the LTS release."

The quandary in question is, of course, that the OpenStack cloud controller that is embedded in the latest 12.04 LTS Server release is changing (and maturing) quickly and companies that want to stay on LTS releases for Ubuntu find that the latest OpenStack releases, which come out twice a year, are not supported officially with the LTS release. The good news is that OpenStack has already agreed to use the same cadence for its releases as Ubuntu has used for its non-LTS regular releases, so everything was already lined up. And rather than doing backports to the 12.04 LTS release every time, tweaking either OpenStack or Ubuntu Server as needed, Canonical is doing the smart thing and making successive milestones and releases of OpenStack available on the then-current LTS release of Ubuntu Server.

That means customers wanting to be on the cutting edge of OpenStack, which you kind of need to be to add the latest (and usually necessary) features, can get each milestone release and then the final release for each six-month OpenStack cycle and know that it will work on 12.04 LTS. This will be done through the Ubuntu Cloud Archive, and is made possible because Canonical set up the systems and procedures necessary to do continuous development and regression testing on both the current LTS release and each bi-annual Ubuntu Server release. 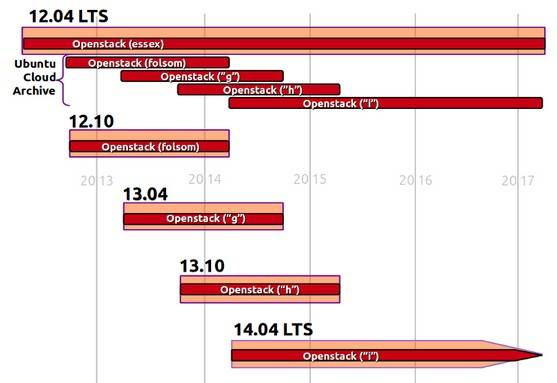 The question, of course, is what happens when the next LTS release comes out, presumably in April 2014. Perhaps OpenStack will have settled down a bit and have most of its core features and therefore not need special treatment. Perhaps not, and the cycle will begin a-new. At this point, Canonical is only granting OpenStack this exception through the end of the 12.04 LTS release.

In addition to updating its means of absorbing OpenStack into its Ubuntu Server LTS release, Canonical has also tweaked its Landscape server management tool.

With the change to its Ubuntu Advantage support services back in July 2010, Canonical simplified its support and made the Landscape management tool available as a hosted service, as it had always been, as well as allowing customers to install it on their own premises on their own servers behind their firewalls.

Canonical has not open sourced Landscape, and has no plans to since it is a key element of its Ubuntu Advantage support services for both desktop and server variants of its Linux distro. (Canonical has to make money on something, after all.)

With the Landscape 12.09 release, the management console can now manage up to 40,000 clients or servers from a single console. The release incorporates the "meta as a service" bare-metal physical server provisioning features that service providers and hosters wanted, since they sometimes deploy full physical machines for customers rather than virty boxes. This MaaS functionality was announced back in April with Ubuntu Server 12.04, and now Landscape knows how to take control of it.

Landscape 12.09 has role-based access, which is important for both security officers and compliance auditors who want companies to deploy fine-grained control to IT infrastructure and give no one any access they don't truly need to do their jobs. Landscape also knows how to kick out compliance reports to prove to auditors and security officers that companies are in fact properly restricting access.

For admins, the Landscape update also includes a full set of APIs that hook into every feature and function of the server control freak, meaning that any other management tool you like to use, such as Puppet, Chef, or Nagios, can be linked to Landscape, as can trouble ticketing systems. And, because you are system admins, after all, you can also create your own custom scripts to make Landscape do whatever you want it to do from the command line.

Landscape also has auto-update policies for the first time, allowing admins to automatically update machines running Ubuntu, applying all patches or only those necessary to plug security holes. Admins can also set update windows, allowing for a machine to be patched only at certain times and thereby avoiding an update storm on the network.

The hosted version of Landscape is part of the Essential, Standard, and Advanced Ubuntu Advantage support contracts for Ubuntu Server from Canonical, which cost from $320 to $1,200 per server per year, and the Standard and Advanced edition of support for Ubuntu Desktop, which cost $105 or $165 per machine per year, respectively. If you want to have a dedicated Landscape server inside your firewall, you have to pay extra for that; the price is not clear. ®