Microsoft wants to push Xbox games beyond the screen and put them all over the sitting room, reveals a patent application published by the US Patent Office last week.

The idea sketched out by MS optical engineer Gritsko Perez in the patent application 'Immersive Display Experience' would create a peripheral display around the television screen filling the room around the user with trees, Orcs and bloodstained train carriages, in a manner reminiscent of the holodeck in Star Trek. The peripheral image would merge seamlessly with the game image actually on the screen, which would remain the focus of the user's attention. 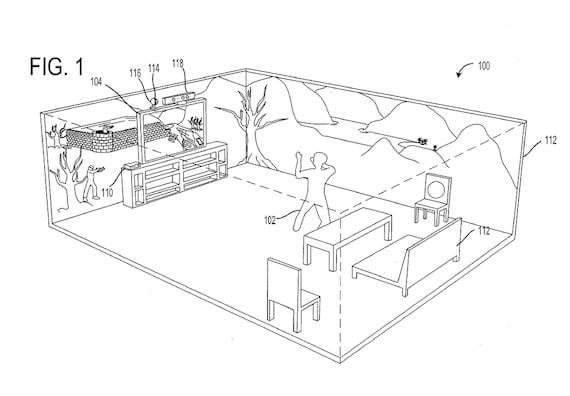 It's not dissimilar to Apple's iGlasses idea, except the images would be visible to all occupants of the room, rather than being confined to the eyeballs pf the goggles-wearer.

The idea is that bringing the room into the game is the next step to making games more immersive, building off Microsoft's Xbox and motion-sensing Kinect. The application reads:

This invention would take it a step further:

The peripheral image would be created by a 360 degree projector and would adjust as the gamer moved around in the game, and in the room. Eye-tracking tech would ensure that the scene shifts as the user looks around it.

A special built in mechanism would avoid shining light into the user's eyes.

Perez's application also suggests that the image could be adjusted to the shape and even colour of the room to optimise the experience.

Of course even if the patent is granted, it's going to take a while to get people mounting 360 degree projectors on their TVs, but it's an interesting step towards simulated reality. ®

Patent application 'Immersive Display Experience' was filed by Gritsko Perez on behalf of Microsoft on 2 March 2011.