Consumer transition a work in progress

Review Chameleon fans, rejoice: openSUSE 12.2 is finally here. This release, due more than two months ago, has been plagued with delays.

Ordinarily a few delays might not be a big deal; bugs happen and most users would agree a late, stable release is better than an on-time buggy one. However, with this development cycle the delays were bad enough to cause some soul-searching among the openSUSE devs. OpenSUSE release manager Stephan Kulow writes that the distro needs to "use the delay of 12.2 as a reason to challenge our current development model and look at new ways."

It's unclear what those "new ways" may mean for the future of openSUSE releases, but at least now you have your openSUSE 12.2.

And the good news is that it is well worth the wait.

This release is noticeably faster than 12.1 and quite a bit snappier than Kubuntu and other KDE distros I've tested lately. The Dolphin file manager in particular feels much faster. In fact if KDE is your desktop of choice, you really owe it to yourself to take openSUSE 12.2 for a spin. Not only is it snappy, it's the best-looking default KDE desktop you're likely to find. If you heavily customise your desktop that may not matter much, but if you prefer to leave things as they are and just want a nice looking theme while you work, openSUSE is a slick choice.

Some might be disappointed to learn that openSUSE sticks with KDE 4.8 rather than making the leap to 4.9, but openSUSE has always been a conservative distro that prefers the stable and tested to the bleeding edge, especially when it comes to the desktop environment. Naturally there are repos available for those that would like to upgrade to KDE 4.9.

That conservative approach to new software means that openSUSE is just now embracing GRUB 2, which is welcome if only to ease the pain of dual booting with other distros - most of which long since made the leap to GRUB 2.

To go along with GRUB 2, openSUSE is now using Plymouth to create a very slick start-up screen. In fact, combine GRUB 2, Plymouth's openSUSE-themed graphics and the very slick KDE desktop theme and whole visual experience of booting into openSUSE puts even Ubuntu to shame. Of course if you prefer the boot sequence to use black-on-white text that says "I'm a nerd; hear me roar", just remember to hit escape during the boot process. 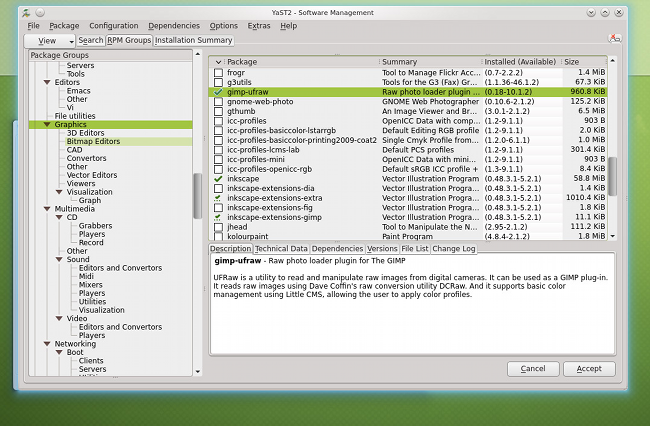 YaST's package management system misses out on the openSUSE polish

For applications, openSUSE takes a more pragmatic approach than the stock KDE suite, installing apps like Firefox and LibreOffice alongside KDE's somewhat less impressive offerings in the same categories. And openSUSE again applies the polish, offering tight integration between outside KDE apps like Firefox and LibreOffice and the Plasma desktop theme. Installing openSUSE from the DVD will also get you some extras like GIMP for photo editing and the Tomahawk social music player, which can pull music from a variety of online sources.

While openSUSE 12.2 has much to love - significant speed boosts, a well-polished desktop and a solid suite of software - there are some rough edges to be aware of, namely the YaST package management tools.

It used to be that the first thing you did with a new openSUSE install was head to YaST and start configuring everything. In fact much of openSUSE's appeal revolved around YaST, which offered graphical configuration tools simply not found anywhere else. These days the competition's tools have improved and YaST feels less necessary.

A place for YaST

While there are still some nice graphical tools in YaST, most of them are aimed at sysadmins. Config tools for things like X.org have moved off to the desktop environment and for the home user YaST is primarily about the Software Manager, which is quite frankly looking long in the tooth compared to what you'll find in Ubuntu or Fedora. It's mostly functional - I encountered a few problems where it wouldn't load, but it would after a reboot - but bare bones. Contrast that with the slick one-click web-based package installation process, and all the rest of the polish found elsewhere in openSUSE – and YaST's package management system feels neglected.

The problems with YaST also raise an interesting question about openSUSE itself: just who is openSUSE built for?

There are fantastic tools for sysadmins, but it can't really compete with CentOS or Red Hat in the server market. There's a very slick desktop and lots of nice software aimed at home users, but much of that is built on top of older, often awkward and confusing tools that feel more enterprise-oriented.

And that's where openSUSE seems poised, one foot still in the enterprise (it is, after all, connected to SLED) and one foot on the desktop. In order to really stand out next to more popular distros like Ubuntu, openSUSE needs to polish its rough edges.

Still, while there's work left to be done, openSUSE 12.2 is an impressive release and well worth checking out whether you're new to openSUSE or just haven't taken it for a spin in a while. ®