Here's another backpack with more pockets than a snooker hall. The rear compartment features a suspended space for laptops that feels super protected, with soft lining. Meanwhile, the main compartment has heaps of slots for the ultra-organised, including a nylex-lined slot for tablets. A couple of quick-access front panels complete the concept, with space for any additional gadgets you may need, as well as a pocket on one shoulder strap for phones.

Considering the capacity you get, the Jets are surprisingly compact, with a version for 17in lappies large, but not nearly as bulky as some rivals in the same class. It's a bit of a plain design, but if I had a lot of stuff to lug around, it's definitely one I could see myself using daily.

Next up is the company's hippy schoolpack, the STM Ranger, which has one large compartment, closed with a drawstring and covered by a flap.

This comes with its own laptop sleeve for added protection and sits in the rear-most tech pocket. A felt-lined slot can be found on the front wall of this with space for large tablets, while there's a decent capacity for anything in the rest of the pocket. The front-most section unzips to reveal smaller slots and another zip pouch, presumably for smartphones.

There isn't much to it, but considering some of the backpacks here are more rucksack in size, the Ranger is a refreshing option for those with less stuff to carry, particularly the 13in version. It is slightly pricey for what you get, though.

There's a lot of hype around Wenger backpacks and after getting my hands on one of its models, I can certainly see why. The Swiss Army knife maker packs its bags full of pockets for tech, with more than enough space for everyday needs and an extremely durable feel. There is a three year warranty too, if you had any doubts.

The Synergy features a padded rear section for up to 16in laptops, a spacious middle compartment for lunches or spare clothes and a pretty large front area for anything else. There's also a small, well padded front pocket, ideal for smaller kit and various other zip-protected areas, including a quick-access compartment on top with a hole to thread headphones through. Nice.

If that wasn't enough, you can extend the base of the main compartment for even greater depth. The shock-absorbing straps and back panel are lined with thick air-flow padding and no matter how much you cram in there, it's always comfortable to lug around.

While this particular version has no dedicated slot for a tablet, the company does offer a vast range of Swissgear backpacks that cater for all tech enthusiasts. Definitely worth considering, particularly at such competitive prices. ® 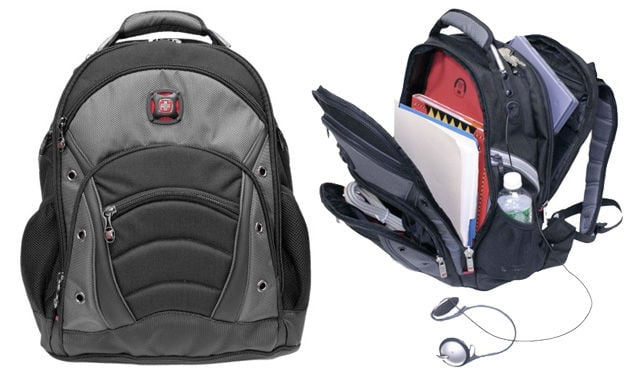