Buried treasure, me hearties! Darr, there be no gold here

Bone-bothering boffins have uncovered a massive Roman mosaic in southern Turkey, proving that the ancient Empire's influence reached far into the area. 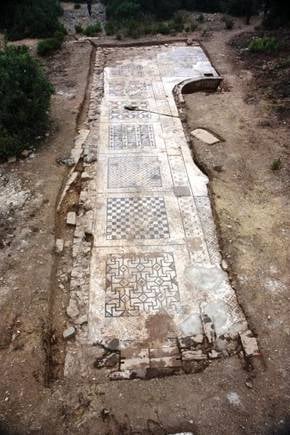 The humungous mosaic, uncovered by a farmer in his field next to a still-standing bathing structure, is 1,600 square feet of meticulously crafted workmanship. It was built at the height of the Roman Empire's power in the third and fourth centuries AD.

"This region is not well understood in terms of history and archaeology," says University of Nebraska-Lincoln prof Michael Hoff.

"It's not a place in which archaeologists have spent a lot of time, so everything we find adds more evidence to our understanding of this area of the Roman Empire.

"We're beginning to understand now that it was more Romanized, more in line with the rest of the Roman world than was suspected before. (The nature of the mosaic) hammers home how Roman this city truly is."

The boffins reckon the mosaic was the floor of a roofed forecourt for the large bath beside it, which featured a marble-lined, 25-foot-long pool that would have been left open to the sun. They also believe that a second half to the mosaic, which still has to be uncovered, will have the same patterns of decoration.

Hoff and his team have been digging on the south Turkish coast since 2005, excavating the remains of the ancient city of Antiochia ad Cragnum, founded by Antiochus of Commagene, a client-king of Rome, in the middle of the first century.

The city held all the typical wonders of the ancient Roman world: temples, baths, markets and colonnaded streets, some of which has been discovered by the team. A third-century imperial temple and a colonnaded street lined with shops have both now been dug up.

The archaeologists were doing a survey in the area in 2001 when Hoff noticed that a local farmer's ploughing had brought up bits of a mosaic, but it was only last year that the museum in Alanya invited him to dig up the whole thing and preserve it. ®

Danish artist pockets museum's cash and calls it art... and other stories

Sponsor Red Bull supposedly gives you wings, but that doesn't mean you have to use them everywhere
Bootnotes6 Sep 2021 | 73