Senate hears Microsoft and HP avoided billions in US taxes

Civilization costs money, get over it

Hearings at the US Senate have been examining how some of the richest technology firms use offshore banking and tax loopholes to avoid having to pay billions to support their native country.

"US multinational corporations benefit from the security and stability of the US economy, the productivity and expertise of US workers and the strength of US infrastructure to develop enormously profitable products here in the United States," said Senator Carl Levin (D-Michigan,) chairman of the Senate's Permanent Subcommittee on Investigations.

"But, too often, to many of these corporations use complex structures, dubious transactions and legal fictions to shift the profits from those products overseas, avoiding the taxes that help support our security, stability and productivity."

He singled out Microsoft and HP for a grilling today, although he acknowledged that they are not the worst offenders.

The Senate investigation showed that in 2011 Microsoft sold off intellectual property rights to some of its products to subsidiaries in Singapore and Ireland for $1.2bn and $2.8bn respectively. Those regional offices then made $12bn in revenues on the products that year, none of which generated any tax revenue for US government coffers.

Redmond's accountants also found tricky ways to avoid paying taxes on products it sells in the US by selling the intellectual property of its domestic business to Microsoft's Puerto Rico branch. As a result it avoids paying US taxes on 47 per cent of its domestic revenue, which amounted to saving $4m a day between 2009-2001.

"One of the business imperatives faced by Microsoft and many US-based businesses today is that we must operate in foreign markets in order to compete and succeed as a company," Microsoft told El Reg in a statement, pointing out that the company always stays within the law in its tax operations.

"Foreign revenue growth helps support the growth of our US operations, creating additional US jobs and supporting an economic ripple effect that leads to greater growth in local communities. Our foreign growth has allowed Microsoft to increase our footprint in the US." 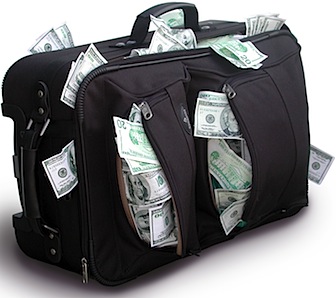 Buddy can you spare a few billion dollars

According to the Senate investigation, HP's tax system avoids paying into the US government via a complicated series of short-term loans from overseas holding companies to pay for US operations, to the extent that the head office is always close to running out of money.

Two overseas affiliates, the Belgian Coordination Center and the Compaq Cayman Holding Corp, then loaned the US parent company the money to cover payroll and expenses. These supposedly short-term loans in 2010 accounted for up to $9bn and avoided US taxes.

Overall US corporations stockpiled $1.7tn of assets overseas and out of the hands of the US tax system, Levin claimed. At a time when federal revenues from corporation taxes are at a historical low and the US government is looking increasingly bankrupt this state of affairs was hurting the country he said.

Can we have a tax holiday, please?

Meanwhile, Microsoft, HP, Apple and others in the technology sector are lobbying hard for what they see as a solution to the issue of overseas earnings. All are calling for a one-off repatriation holiday, where overseas assets could be returned to the US at a low level of tax. This money, the argument goes, would be reinvested in the US and used to create jobs.

The same argument was used successfully in 2004 with the Homeland Investment Act, when the then Bush administration agreed to a one-off tax holiday for overseas earnings which would help the "wealth creators" invest in American jobs. Around $362bn was then imported into US company coffers, which supporters of the legislation insisted would lead to over a million new US jobs created.

According to US Treasury figures, HP repatriated $14.5bn under the 2004 plan. It then spent the next two years cutting its US headcount by more than 14,000 jobs while management awarded themselves huge bonuses and paid the bulk of the money straight back to investors in the form of dividends and share repurchasing.*

Dell also lobbied for the "one-off" 2004 repatriation legislation and was able to ship back $4bn in overseas revenues. To be fair it did spend $100m building a new manufacturing plant in Winston-Salem, then spent $2bn on a share repurchasing scheme.

It should be stressed that the tax avoidance systems described in the Senate hearings are all technically legal. Microsoft, HP, Dell and Apple employ large numbers of highly skilled tax personnel to make sure directors stay on the right side of the law and no-one's suggesting anything illegal is going on.

But ethically, at least to this El Reg hack, the situation stinks. No-one likes paying taxes, but they are fundamental to the environment that built the high tech sector. You need an educated workforce, with enough wages to buy toys like the iPhone, along with a good communications infrastructure and the rule of law, in order to build a successful economy, and that costs money that most companies seem unwilling to pay these days. ®

* More details on the financial effects of foreign income tax holidays can be found here.