Polar sea ice could set another record this year

Exceptionally large amounts of it down south right now

Opinion The world's media is extremely excited at the thirty-year record low extent of sea ice at the North Pole which occurred just days ago: but almost nobody is reporting on the fact that something almost equally unusual is going on down around the coasts of Antarctica. 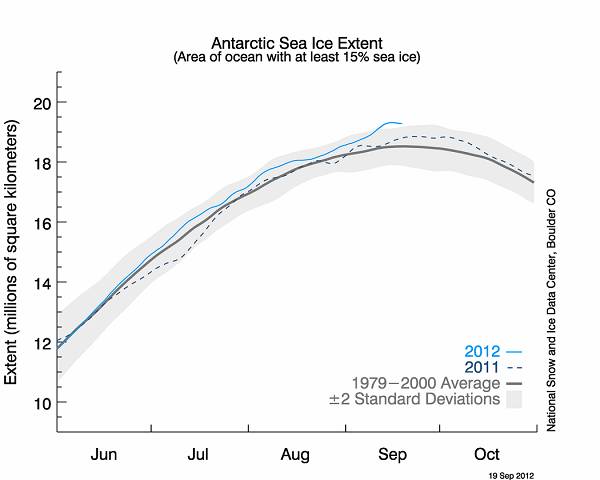 Whoa, that's a lot of ice

Even as the Arctic sea ice starts to grow again from its summery shrunken condition, the austral ice at the planet's other pole may have yet to reach its wintery peak extent. As the graph shows, at the moment it is much larger than normal for the time of year, and depending on what happens in the next week or so it might hit a record high. There has already been a point at which a record for that date occurred, and only a handful of higher daily satellite readings have ever been taken.

The sea ice around the coasts of Antarctica on average covers roughly the same amount of sea as the north-polar sea ice does: it's just as important, though you wouldn't know it by looking at the world's press right now. Another thing not everyone knows is that even as Arctic ice has been on a long decline since satellite measurements began, the Antarctic ice has been growing steadily (this despite well-publicised ice shelf losses around the Western Antarctic peninsula, bucking the overall continental trend).

Taking all the world's sea ice together, then - as opposed to focusing exclusively on the Arctic - the picture is far less gloomy than most media outlets would have you believe. Generally the world has between 15 and 23 million square km of the stuff: at the moment it has a bit more than 18m, which is approximately 1.5m below average for this time of year. Earlier this year, though, it was nearly 1m up on the seasonal average.

There are some other things to bear in mind, too: melting sea ice, of course, doesn't mean rising sea levels the way melting glaciers or ice sheets on land might. Then there's the fact that the satellite record is so short and the polar regions so little known: longer term variations like the one we're seeing may be entirely normal. Famously the president of the Royal Society (Blighty's premier scientific institution) wrote to the Admiralty in 1817:

It will without doubt have come to your Lordship's knowledge that a considerable change of climate, inexplicable at present to us, must have taken place in the Circumpolar Regions, by which the severity of the cold that has for centuries past enclosed the seas in the high northern latitudes in an impenetrable barrier of ice has been during the last two years, greatly abated.

(This) affords ample proof that new sources of warmth have been opened and give us leave to hope that the Arctic Seas may at this time be more accessible than they have been for centuries past ...

Even so, though, many are warning of an "ice free" arctic - perhaps in only a few years from now. Then, of course, without ice to reflect heat back into space, runaway global warming would surely be a certainty?

One should note first of all that "ice free" in a satellite observation sense doesn't mean "free of ice" - there would still be a lot of ice floating about in that scenario. Then, however, it's also worth considering what Steffen Tietsche, a polar ice expert at the Max Planck Institute for Meteorology in Hamburg, has to say. Tietsche and his colleagues wrote last year in a leading peer-reviewed geophysics journal:

We examine the recovery of Arctic sea ice from prescribed ice-free summer conditions in simulations of 21st century climate in an atmosphere–ocean general circulation model. We find that ice extent recovers typically within two years.

The excess oceanic heat that had built up during the ice-free summer is rapidly returned to the atmosphere during the following autumn and winter, and then leaves the Arctic partly through increased longwave emission at the top of the atmosphere and partly through reduced atmospheric heat advection from lower latitudes. Oceanic heat transport does not contribute significantly to the loss of the excess heat.

Our results suggest that anomalous loss of Arctic sea ice during a single summer is reversible, as the ice–albedo feedback is alleviated by large-scale recovery mechanisms. Hence, hysteretic threshold behavior (or a “tipping point”) is unlikely to occur during the decline of Arctic summer sea-ice cover in the 21st century.

So, all in all, probably not time to panic yet. ®