Toshiba AT300 10in Android tablet review

Hello Tosh, got a new Tegra?

To date Toshiba’s Android tablets have barely made a ripple let alone a splash in the fondleslab market but the new AT300 may change that. A replacement for the AT200 – that I failed to get excited about earlier in the year – the new device is cheaper and, thanks to its Tegra 3 underpinnings, considerably more powerful. 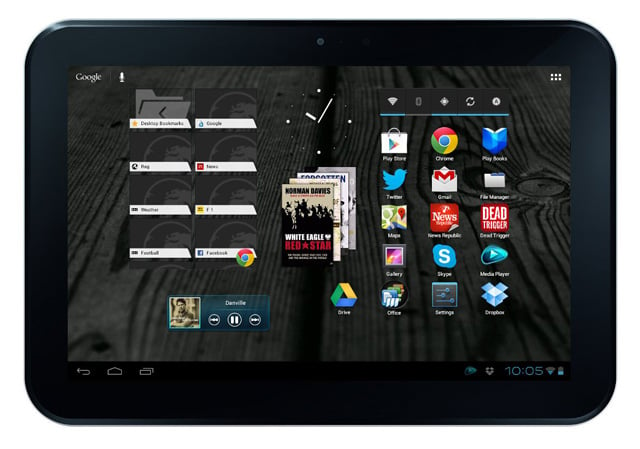 When it to comes to screen resolution, Toshiba clearly thinks most of us are happy with 1280 x 800 and 149dpi. It may have a point. Most of my videos are encoded at 720p and I doubt I’m alone in that. So while I like the idea of 1080p tablet displays, I'll be damned if I'm paying extra for the privilege.

When it comes to brightness, viewing angles and richness of colour, the LCD screen gives a bit away to the latest IPS panels. To be fair, the display not what you could call poor and doesn’t compare at all badly with my Google Nexus 7.

In all areas, the AT300 is a bigger beast than the super-slender AT200. At 599g it’s 41g heavier too. Even so, it’s still thinner and lighter than Apple’s latest iPad and Acer’s A510. It’s built to a higher standard than the Acer too. In fact, the build quality is altogether excellent due in large part to the aluminum band that forms the edge of the device. While the AT200 was just a bit bendy the AT300 has no more flex to it than a one inch thick sheet of cast iron.

Unusually, the AT300 packs a full-sized SD card slot complete with tray – so you can leave a card in place with no fear of accidental or premature ejection. With 32GB SD cards costing less than £15, I heartily applaud this feature. The operating system in play here is 4.0.3 Ice Cream Sandwich in entirely vanilla form and the scuttlebut has it that a Jelly Bean update is due pretty soon.

Full-size SD card slot on the side

A little surprisingly, the AT300 doesn’t use the lowly Tegra 30L chipset found in the Nexus 7 and Asus Transformer Pad but the faster incarnation used in the Transformer Prime, which also has a more sprightly 520MHz GPU. 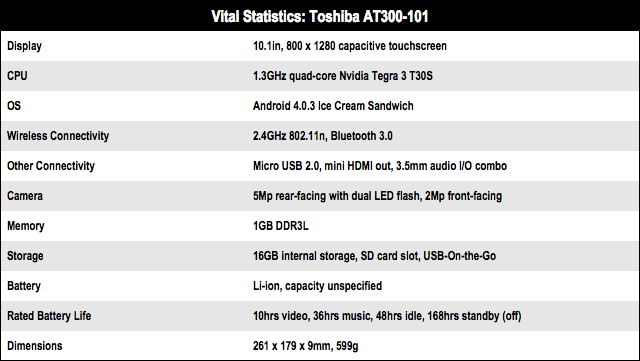