Seagate: Our tech will be better than WD's helium-filled hardness

We've had WD showing off the flash-disk mutants on its road map to the investment analysts, boasting of its upcoming helium-filled drives - where did they come from? - and 5mm ultra-thin drives. Now Seagate has followed suit and said it will get there first, wherever it is.

Seagate and WD are the squabbling sisters of the hard disk drive business, both determined to be number one. WD, led by CEO John Coyne, is currently pulling ahead after it pulled a fast one and snapped up Hitachi GST, a move denied to Seagate because it would have become far too dominant for the competition authorities to swallow. So Seagate swallowed Samsung's disk drive business as a consolation prize and then bought La Cie for a bigger consumer/SOHO presence.

Now Seagate has followed WD and given the good news about its situation and some futures to the investment analyst community. Aaron Rakers of Stifel Nicolaus sent out bulletins from the event. First the bad news: disk drive demand is down. The total addressable market (TAM) is expected to be 140 million to 145 million in the September quarter, 10 per cent lower than originally forecast.

Seagate expects its revenue to be between 5 and 7 per cent lower in the third quarter. It expects to grab 40 per cent of the TAM, with WD taking 45 per cent. Shipments should pick up in the fourth quarter, to between 150 million and 155 million. Rakers writes that "Seagate believes … that the migration toward the cloud vs PCs ultimately looks to be a positive secular dynamic (ie, increasing platters/heads per drive)." The word "secular" here means a stable longer term change.

Seagate's boss, meaning chairman, president and CEO Steve Luczo, said, according to Rakers, that: "Seagate noted that roughly three years ago the industry saw an acceleration to petabytes shipped to the mid-30 per cent range, while areal density growth is starting to slow to ~25 per cent."

Areal density growth is not keeping up and current perpendicular magnetic recording (PMR) is not going to be able to make up the difference. How will the HDD industry cope? Shingled magnetic recording (SMR) is a way of increasing areal density by overlapping tracks on a drive, and Luczo said that SMR drives are being sampled now with shipments expected to start before the end of the year. SMR drives were not mentioned in WD's analystfest. Helium-filled drives with seven platters inside were WD's way of combating the areal density increase rate lag.

SMR is a short-term filler. The real PMR replacement, heat-assisted magnetic recording (HAMR), will come in 2014 or later, Luczo said. The CEO said the day's presentations were being served from an enterprise HAMR development drive. The use of SMR and then HAMR will not change the approximate 25 per cent a year increase in area density. That seems set to be a fixed upper rate for a good few years. 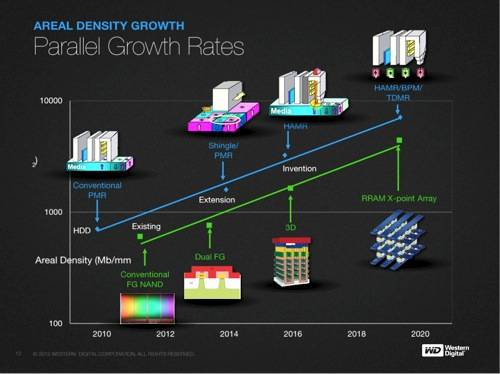 The chart above from WD's investor day indicates it sees SMR being a 2014 technology, at least a year after Seagate, and HAMR coming in around 2016, possibly two years after Seagate. El Reg thinks it inconceivable that such technology delivery timing differences will actually happen on the day, however, with both Seagate and WD aiming to deliver new technologies within one or two quarters of each other.

Luczo is convinced that cloud computing and increased use of data consumption-oriented tablet and other consumer internet-connected devices will fuel demand for disk drive shipments into the cloud. Rakers writes: "Seagate notes that by 2020 ... over 60 per cent of the petabytes shipped will be into cloud environments (versus ~25 per cent currently)."

Rakers pointed out this:

A side effect of using disk drives for cloud archive purposes would be to transfer some portion of the petabytes of archive data destined to being stored on tape onto disk instead, thus enlarging the overall demand for disk drives.

WD talked about its hybrid disk drive strategy, that's disk drives with small flash caches to serve hot data fast to the host computer, not as fast overall as a pure SSD but plenty faster than a straight hard drive and cheaper than an SSD. Seagate is now producing its third generation 2.5-inch Momentus XT hybrid drive, WD being late to this particular party.

Luczo said that, by 2017 over 85 per cent of Seagate's HDD production will be of hybrid drives, covering both consumer and enterprise products. Cold boot times are just 2 secs slower than an SSD, making hybrid HDDs a good fit for the tablet and Ultrabook notebook market.

Seagate is sampling its own 5mm 2.5-inch drives but there is no news about production availability or volumes. A hybrid 5mm drive would be a very good fit to Ultrabook and tablet needs, offering near-SSD speed and 500GB or more capacity at substantially less than SSD prices.

Luczo said Seagate would ship desktop PC hybrid drives before the end of the year. Enterprise hybrids would be coming soon as well. El Reg thinks this could mean before the end of 2013's first quarter. Such drives would provide twice as many IOPS as straight spinners. Luczo said hybrid drive discussions with customers have involved exclusivity questions, implying neither Toshiba nor WD might be involved as second sources.

A theme coming through – and noted by Rakers – was that Seagate appears to be focused on being first to market with new technologies. So it will not wanted to be behind WD in shipping 5mm drives, hybrid drives, 7-platter 3.5-inch drives or SMR drives.

El Reg wonders if we might see helium-filled filled hybrid drives, giving us both a capacity boost and an IOPS improvement for hot data. The implications of having hybrid SMR drives needs thinking through. Such drives are slower than non-SMR drives when rewriting data. It could be that some kind of caching scheme using flash could speed this up and enlarge the markets SMR drives could be sold into.

Another fascinating prospect would be the notion of helium-filled SMR drives giving us a double capacity boost; extra platters on the one hand and the SMR increment on the other.

The two mainstream disk drive rivals are set on competing strongly to bring their technology goodies to our attention, with each striving to be top dog. The two Steves – Luczo and, soon, Milligan – are striving to be first with the HDD industry-topping technology. Can Milligan continue John Coyne's winning streak, or will Luczo show up WD as a helium-filled windbag? Watch this space. ®