NASA releases stunning image of our universe's distant past

A 13.2 billion year peek into the past

Photo NASA has combined 10 years of deep-space photos to create what it dubs the "eXtreme Deep Field" (XDF), an image of a tiny slice of the sky that contains well over five thousand galaxies, some almost unimaginably ancient.

"The XDF is the deepest image of the sky ever obtained and reveals the faintest and most distant galaxies ever seen," said principal invesigator Garth Illingworth in a statement announcing the image's release.

The XDF is an upgrade to NASA's Hubble Ultra Deep Field (HUDF) image, captured between 2003 and 2004. The HUDF, published in March 2004 and displaying a tiny slice of the sky in the constellation Fornax, contained thousands of galaxies, and was at the time the deepest peek into the past that mankind had ever achieved.

Now the Hubblers have outdone themselves with the XDF, which – even though it covers a smaller field of view than did the HUDF – contains an estimated 5,600 galaxies, with the faintest being one ten-billionth the brightness of what we puny humans can see with our unaided eyes.

The slice o' sky depicted in the XDF is in the southern hemisphere, which Hubble photographed over the last decade in 50 different imaging sessions with a total exposure time of two million seconds. The space telecope used two of its best cameras – the Advanced Camera for Surveys and Wide Field Camera 3 – to capture over 2,000 images, which NASA combined to create the XDF. 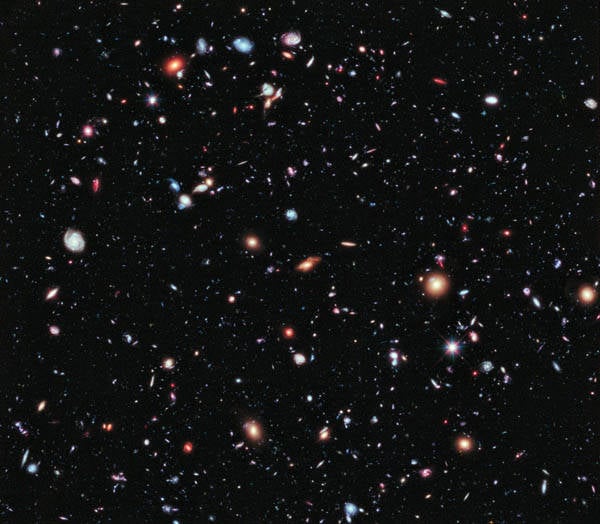 Behold the XDF – and remember that each and every dot is an entire galaxy. Feeling a wee bit small, mate? (click to enlarge)

"XDF allows us to explore further back in time than ever before," Illingworth said. Far back in time, indeed. Most observers date our universe as being about 13.7 billion years old (although some disagree), and the XDF contains galaxies from as long ago as 13.2 billion years – a turbulent galaxy-forming epoch in our universe's history.

According to NASA, the youngest galaxy in the XDF was formed a mere 450 million years after the Big Bang. Considering that our Earth is generally considered to be 4.54 billion years old, a 450 million-year-old galaxy is a mere babe in the woods.

The XDF, as impressive as it is, will certainly be surpassed when the James Webb Space Telescope eventually makes its way into orbit after a fingers-crossed launch that's now scheduled for 2018. NASA plans to have the Webb survey the same patch of sky as was used to create the XDF.

Frankly, we space addicts at The Reg can hardly wait for the images that the Webb will produce. The only quest is that after the Ultra Deep Field and eXtreme Deep Field imagery, what will NASA call the next peek into the past?

We certainly hope it won't be called the "Ultimate Deep Field" – after all, if we can keep our civilization together for a bit longer, there are certain to be future telescopes that will make the Webb look like the one that Galileo pointed at Jupiter in 1609. ®