A river ran through it

NASA has announced that the Curiosity rover has found evidence of a fast-moving stream that once flowed over the Martian surface.

"From the size of gravels it carried, we can interpret the water was moving about 3 feet per second, with a depth somewhere between ankle and hip deep," said Curiosity science co-investigator William Dietrich of the University of California, Berkeley in a statement.

"Plenty of papers have been written about channels on Mars with many different hypotheses about the flows in them. This is the first time we're actually seeing water-transported gravel on Mars. This is a transition from speculation about the size of streambed material to direct observation of it."

Curiosity found the long-gone water course between the north rim of Gale Crater and the base of Mount Sharp, using its mast-mounted camera system to examine two outcroppings named "Hottah" and "Link."

Water-rounded gravel, ranging from small pebbles to rocks the size of golf balls, and the remains of a sedimentary streambed are clearly visible, albeit since fractured and twisted, possibly by a later meteoroid strike. 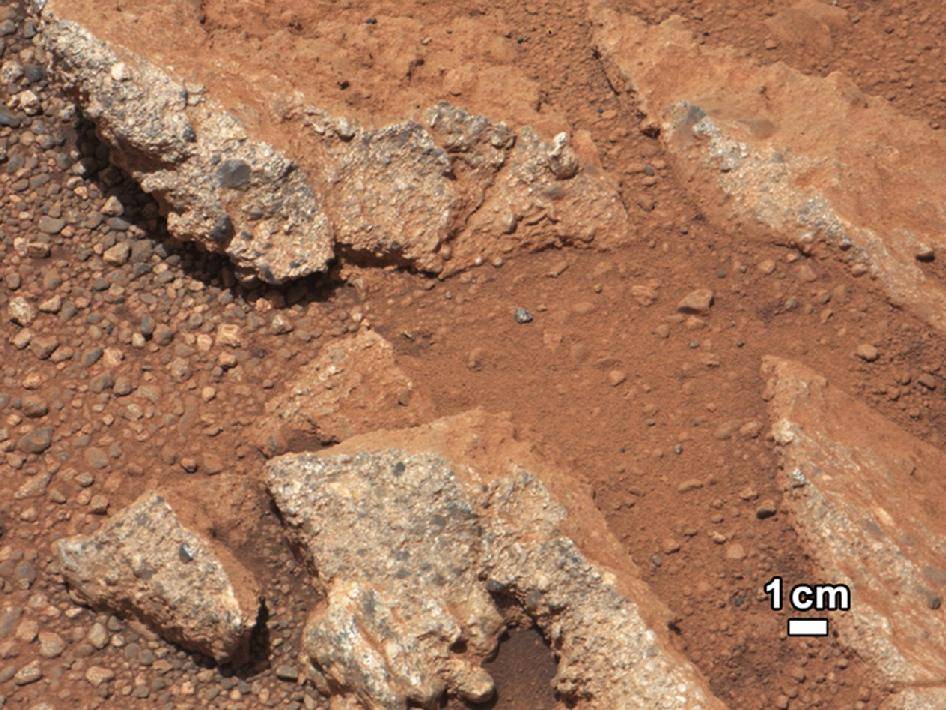 Next up, the hunt for the Martian sand trout (click to enlarge)

"Hottah looks like someone jack-hammered up a slab of city sidewalk, but it's really a tilted block of an ancient streambed," said Mars Science Laboratory Project Scientist John Grotzinger of the California Institute of Technology.

Despite the discovery, the Curiosity team isn't hopeful that the stream bed will be a good place to look for signs of organic life on Mars. They are still banking on finding that in the clay and sulfate minerals found on the sides of Mount Sharp.