And the small fries emsmallen or jump to other fires

Like mainframe-makers IBM and Unisys, BMC Software gets a sizable portion of its $2.12bn in annual revenues – and presumably a disproportionately larger portion of its profits – from those venerable old card wallopers all gussied up as modern servers. This is why BMC has been conducting surveys over the past few years on the mainframe base to help steer its own business decisions and show that the sector is stable.

BMC's mainframe products, which it breaks out as Mainframe Service Management tools, drove a hefty $829.9m in revenues in the fiscal 2012 year ended in March of this year, with license sales up 6.7 per cent and growing more than three times as fast as the tools BMC sells to manage distributed and virtualized systems. You may wonder why IBM hasn't bought BMC already, but the US Department of Justice might have something to say if IBM tried to buy or BMC tried to cash out.

So BMC will continue to compete with IBM, CA Technologies, and a handful of others that peddle tools that help mainframe shops crank up the utilization on the boxes. And as the seventh annual mainframe survey shows, it doesn't look like any more mainframe shops are looking to dump their boxes than have in past years, and those that are looking for an alternative are generally on the low-end of the market.

In any given year, somewhere between 5 and 6 per cent of the IBM mainframe base that BMC polls says they are looking to move off their mainframes, says John McKenny, vice president of strategy and operations for the MSM line at the company. This year was no different, with 6 per cent of the 1,264 customers polled say they were looking for the exit signs. Another 40 per cent said they expected to keep mainframes around for the long term for existing applications, and 50 per cent said they were looking to grow their mainframe complexes for growth on existing workloads and to run new workloads. The other 4 per cent in the survey said "Other" ... so heaven only knows what that means.

When customers do leave, they generally are not doing so by porting their applications to Java, but rather by replacing the mainframes and their legacy applications with shiny new servers (generally Unix or Windows machines) with off-the-shelf packages. That said, those who are sticking with the mainframe absolutely are adding Java applications to their machines, either from third parties or homegrown – and they're also, where practical, trying to replace COBOL/CICS, PL1, and assembler programs with Java. "Customers want to be able to hire college students to write their applications," says McKenny.

Bean counters, mainframes and IT budgets

As you might expect, customers operating mainframes cite the high resiliency, the high throughput, and the security of mainframes as reasons to keep them. But as usual, the mainframe sticks out like a sore thumb in the IT budget, and so is a constant target for bean counters and IT execs and developers who know and like other platforms. "The mainframe is a big, single line item in the budget because it is a consolidated system," McKenny tells El Reg. "It really pops out."

The shops that are looking to jump off the mainframe tend to be smaller shops with modest amounts of MIPS, the traditional and now largely abstract measure of relative performance in a mainframe which used to count how many millions of instructions per second a central processor could crank through. Those who stay tend to continue to add MIPS. "The small tend to get off the platform or get smaller, while the medium and large customers tend to get larger," explains McKenny.

McKenny says that more than half of the shops that BMC has as customers are smaller mainframe shops, with fewer than 1,000 MIPS of capacity, with the biggest shops having several hundred thousand MIPS of capacity. BMC reckons there are around 3,500 unique IBM mainframe customers worldwide, and IBM has said in recent years there are around 4,000. The site count and the footprint count are both obviously quite a bit larger since main shops have multiple frames for high availability and scalability reasons, and often mainframes in different locations for the same reasons.

The annual mainframe survey has never been restricted to BMC shops, and the company uses a variety of ways out there on the web to reach the 1,264 customers who took the survey in 2012. About 60 per cent of those polled came from the Americas, 30 per cent were from Europe, and the remaining 10 per cent were from the Asia/Pacific region. By industry, 43 per cent of those polled for this year's survey came from the financial services and insurance industries and 19 percent were from local, state, and national governments. A little more than half had revenues – or in the case of governments, budgets – in excess of $1bn. 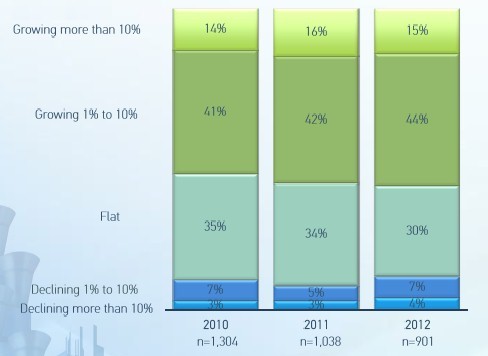 Not everyone who was polled by BMC was willing to talk about their plans for adding MIPS capacity, and if you look at the number of survey respondents to this question for the past three years in the chart above, you can see that the number has been dropping as well. About 4 per cent of those who did talk about capacity said they were dropping their MIPS capacity by 10 per cent or more and another 7 per cent said they were cutting back from 1 to 10 per cent compared to a year ago. These are general purpose MIPS for running z/OS, z/VM, z/VSE, and z/TPF operating systems, not so-called specialty engines with lower prices on hardware and software for running Linux on the mainframe (IFL engines) or accelerating DB2 (zIIP engines) or Java and XML (zAAP engines) workloads.

About 30 per cent of the mainframe shops have stood pat with their MIPS this year, and 44 per cent – a slightly larger percentage than in 2010 and 2011 – said they would added a modest amount of processing capacity (between 1 and 10 per cent of their current pool) in the past 12 months. And consistent with prior years, about 15 per cent of those polled said they had increased their aggregate MIPS by more than 10 per cent this year.

Specialty engines are being increasingly adopted by mainframe shops, and it is no surprise at all when a System z processor core running z/OS costs four or five times an IFL, zIIP, or zAAP. Here's the trend line for the zIIP engines from the past three BMC surveys: 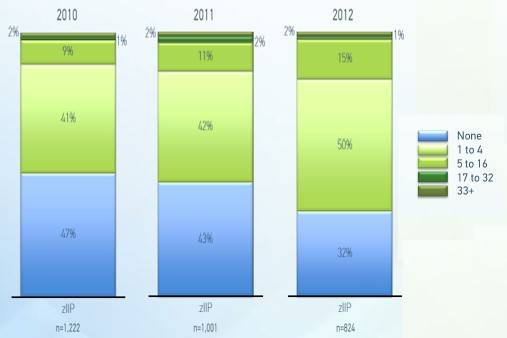 zIIP specialty engine use on the rise at mainframe shops

As you can see, 68 per cent of the companies polled who answered this question (again, a very large portion of the mainframe shops polled didn't want to answer the capacity questions) had zIIP engines, with about half with a handful and a small percentage with dozens. (The fact that all mainframe shops don't have them is really an indicator of how popular CICS/VSAM and IMS flat-file databases are out there in COBOL land, even to this day. zIIPs don't accelerate these systems programs, only the mainframe variant of the DB2 relational database.)

There were two other interesting things in the mainframe survey.

First, as you might expect, mainframe shops are concerned about finding and retaining the DB2, IMS, and mainframe management skills they need to make those card wallopers sit up and roar like a T-Rex. Only about a quarter of those polled said they are not worried about future staffing issues as the pool of mainframe talent continues to gray and bald (or both). IBM has put new interfaces on its systems software to make it easier for newbies to learn and run these systems, and Big Blue is also pushing lots of students through its Academic Initiative (particularly in Asia) to get college students at least acquainted with the System z mainframe. Companies are also hosting their own boot camps to train college graduates in the ways of the mainframe.

The second thing that jumped out was that for all the talk about the ruggedness of mainframes, 39 per cent of the mainframe shops polled said they had one or more unplanned outages in the past year. Of these, 29 per cent said the outage it had negligible impact on their companies, but 10 per cent said the surprise downtime had a significant impact.

Hardware failures were the main cause of 31 per cent of these outages, with system software crashes being another 30 per cent, in-house application crashes driving another 28 per cent and a failed change process (a patch or some other tweak) accounting for 22 per cent of the causes of unplanned downtime. Obviously, there were multiple causes in some cases (and perhaps most cases) but given all the talk about the legendary uptime for mainframes, 10 per cent of customers experiencing significant unplanned outages seems like a high number. You can take a gander at the 2012 mainframe survey from BMC here. ®