Oracle cranks up the flash with Exadata X3 systems

OpenWorld 2012 System maker Oracle is not content with the feeds and speeds of its Exadata clusters for running data warehousing and online transaction processing, so co-founder and CEO Larry Ellison announced a fourth generation of machines with substantially expanded main and flash memory.

Ellison says this will allow for companies to keep most of their databases in memory rather than out on much slower disk drives. "If you thought the old Exadatas were fast, you ain't seen nothing yet," bragged Ellison.

As with other Exadata database machines, the new X3 is based on Intel's Xeon processors, in this case on two-socket nodes based on the latest "Sandy Bridge-EP" Xeon E5-2600 processors, which debuted back in March.

Specifically, the nodes in the Exadata X3 machine are based on eight-core E5-2690 processors, which spin at 2.9GHz, and there are 33 per cent more of them in a rack. As with the prior generations of Exadata boxes, the X3 puts eight servers nodes into a rack, and in the case of the X3 machine, each node has a maximum of 512GB of main memory for a total of 4TB per rack, which is 75 per cent more memory than an Exadata X2 rack using Xeon 5600 processors in eight two-socket nodes offered.

The Exadata X3 also has significantly fatter PCI-Express flash memory drivers, sporting Oracle's own Flash Cache "heuristic hierarchical mass memory," or X3H2M2 as Ellison quipped we should call it, which keeps the hottest data in main memory in the server nodes, then hot data on the flash modules, and then the coldest data on 500TB of disk drives in the Exadata storage nodes.

The Exadata storage nodes have 22TB of flash drive capacity per rack, which is four times the flash capacity of the Exadata X2 machines.

The disks should be able to hold 5PB of relatively cold data, but the idea is that you will hardly ever go to those disks.

Feeds and speeds of the Exadata X3 system

"Disk drives are becoming passé," explained Ellison, saying that it will be possible for even large customers to store multiple databases in "semiconductor memory" rather than on much slower rotational devices. "You virtually never use your disk drives." 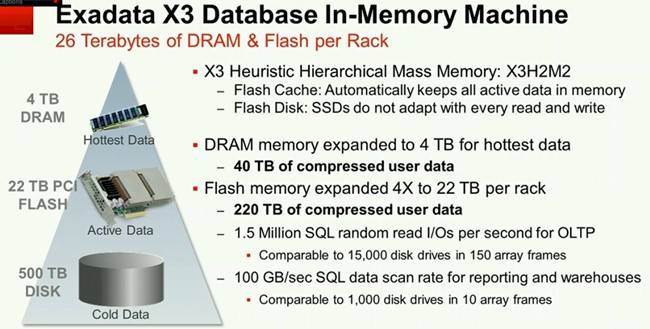 The memory hierarchy of the Exadata X3 system

The big change with the Exadata X3 machines is that the Smart Flash algorithms (these enabled the reading of compressed data out of the flash memory into the server nodes through InfiniBand switches between the Exadata storage nodes and those eight servers that run the Oracle database at very high rates) have been upgraded to allow to add very fast writes now.

The cache in the Exadata X3 storage servers can sustain 1.5 million SQL random read I/O operations per second (IOPS) running across a single rack with 8KB file sizes, which Ellison said was comparable to 15,000 disk drives across 150 storage racks. On the write side of the I/O equation, the Exadata X3 can drive 1 million write IOPS out of the database servers into the Exadata storage servers, or about what it would take 10,000 disk drives (about 100 racks) to absorb.

Importantly, said Ellison, customers using Exadata V2 and Exadata X2-2 (two-socket nodes) and X2-8 (eight-socket nodes) clusters today will be able to get this substantially upgraded write functionality as a software upgrade. Obviously, the older machines have less flash cache, so their read and write rates will be lower than the new Exadata X3 boxes. Ellison said that it was on the order of about a half million random writes on the existing V2 and X2 machines.

A single rack of the Exadata X3 iron can do an SQL data scan for reporting or on data warehouses at a rate of 100GB/sec out of the storage arrays into the server nodes. (We'll get into the competitive analysis once more of the feeds and speeds of the Exadata X3 machine are available, which were not out at press time on Sunday evening.)

Ellison said that the new Exadata X3-2 machine would be sold at the same prices as the X2-2 boxes, and that the company was also offering a cut down eight-rack configuration to go after smaller customers. (The Exadata X2-2 machines came in full, half, and quarter rack set ups.)

The eighth rack setup has sixteen cores (presumably not in a single node, since one of the selling points of Exadata is high availability) with 54TB of disk capacity and 2.4TB of Smart Flash flash memory. The fact that you can upgrade to a quarter rack configuration with a software command suggests it is really a quarter rack setup with half of its capacity turned off and under electronic lock and key.

In any event, this eighth racker of Exadata X3 has a list price of $200,000, and Ellison suggested potential customers negotiate hard to push the price down even lower. "I know these guys and gals, and they are always ready to deal," Ellison advised.

You don't hear executives say that sort of thing in the IT industry every day. ®