With the release of the 2012 suite, it's finally safe to openly say that SCDPM doesn't suck. If that wasn't enough, SP1 brings a raft of new features - and the really neat stuff starts happening. SP1 sees Cluster Shared Volumes get backup support at usable speeds and deduplicated volumes see support. All the new Hyper-V features are supported, including uninterrupted protection for VMs undergoing live migration.

If Hyper-V is your virtualization stack, SCDPM 2012 is a nice to have. SP1 will be essential.

With 2012, SCOM has high availability baked right in, so your monitoring system won't go down if your servers do. SP1 brings expanded Linux, Azure, .NET, MVC and WFC support. My favorite feature is the ability to peer into Hyper-V switches via SCVMM.

As with any good monitoring solution, the list of devices and applications that are compatible with SCOM is exhaustive. The compatibility list is large enough – and growing at such a rapid pace – that the quickest way to figure out if your device is supported is not to Google it. Call your vendor and / or Microsoft instead.

Monitoring applications rarely see revolutions in functionality. The usual model is a steady evolution of support for various frameworks, APIs, products and so forth. Year-on-year, SCOM has not disappointed: it is the best product on the market to monitor a Microsoft environment.

Results are more mixed when we start talking about heterogeneous environments. Competing products can and often do offer more support and functionality outside the Microsoft ecosystem. This is often at the cost of poorer monitoring of Microsoft's offerings.

SCOM is a fantastic product, but try before you buy. Whether or not SCOM will meet your needs better than a competing product depends entirely on the fiddly little details of the environment you support.

System Center Orchestrator (SCO) is the still-under-contraction nervous system of the System Center suite. Microsoft borged Opalis at the end of 2009, and Orchestrator, a workflow automation product, is based on software it gained through the acquisition.

It still feels like a product that is not quite integrated properly into the rest of the collective. Given Microsoft's history, the next version should be pretty amazing. For now, Microsoft's massive ecosystem needs time to digest SCO before we start seeing the full potential of this application.

Dubbed "automation software," SCO boils down to a WYSIWYG cron job generator. If you've used SQL's management suite to create Server Agent jobs, you know what I'm talking about. For those who haven't, picture making "scheduled tasks" with Visio, except that these tasks can control everything on your network. 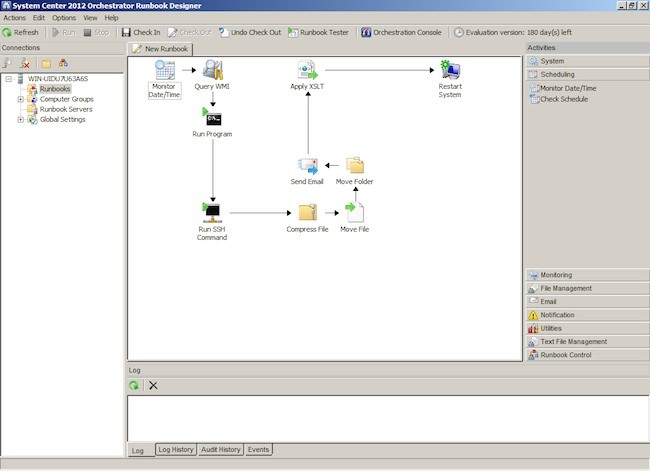 Along with its hooks into Microsoft's various applications, SCO takes advantage of "integration packs" provided by vendors. Deploy hundreds of apps in a click, sling VMs to and fro, even play the Tetris theme by power cycling blades.

SCO is worth the time to learn, but I'm nervous about giving this robot root access to every widget in my data center. I want a lot of someones to walk through that particular minefield ahead of me.

System Center Service Manager (SCSM, formerly System Center Reporting Manager) is a help desk/ticket system. I've had little use for SCSM in the past. I'm a Spiceworks fan and, for the SMEs I work with, Spiceworks is a big hit.

I found the language used throughout the app a bit off-putting. Consider that the SP1 features list for SCSM proudly proclaims the ability to pivot by cost center. If you can stomach that, you in a completely different market from me.

From the standpoint of raw functionality, SCSM does what you'd want a ticketing system to do. SCSM 2012 also includes some neat data warehousing features. It collects information on everything it can find; system configuration, system events, who moved which VM or responded to what ticket. SCSM can see everything you do (for which System Center has hooks to provide visibility,) and keep a record of it.

Throw some reporting on this and you can (in theory) see exactly what changes happened when and how they might have caused a given problem. I have my doubts about the uptake of this; if all the switches are flipped, this becomes a Big Data problem in a real hurry.

Organizations big enough to create data at a rate to challenge SCSM (and the underlying SQL server) are also those who are most likely to be eager to obtain the level of accountability SCSM promises.

Adam Fowler, a fellow systems administrator based in Adelaide, Australia, sums up SCSM best: assuming you already pay for System Center, it is a functionally free helpdesk ticketing system that is "better than just an Inbox." He has used SCSM for some time now and swears by it. It is worth taking the time to check it out for yourself.