Pastafarians: Get your noodly appendages off that Facebook suspect

Greek Pastafarians staged a protest in Athens on Friday, days after a man was arrested for running a Facebook page that satirised a revered monk.

The 27-year-old faces blasphemy* charges over a Facebook page that mocked deceased Greek monk Elder Paisios, using the name Elder Pastitsios (the name of an even better known Greek dish).

Pastitsios allegedly trolled Greek nationalist blogs, planting hoax accounts of 'miracles' which they reproduced without question. These hi-jinks prompted complaints from supporters of the neo-fascist Golden Dawn party as well as the Greek Orthodox Church. Golden Dawn recently gained its first seats in the Greek parliament. 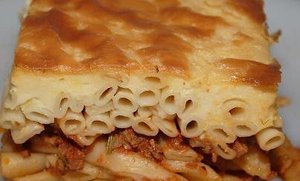 Delicious: The meaty, cheese-topped deliciousness that
is pastitsio. It's something like a lasagne, but with
tubular bucatoni/macaroni variant (or similar)**.

On 24 September, Greece's Cyber Crimes division arrested a 27-year-old man on charges of blasphemy, sparking protests on Twitter under the hashtag #FreeGeronPastitsios, and small street demonstrations by supporters. The unnamed suspect was arrested at his home in Evia by officers from the police's cybercrime unit, three days after Christos Pappas - a Golden Dawn MP - complained about his page in written questions to the religious affairs minister, Athens News reports.

A police statement on the arrest albeit in Greek can be found here. ®