Is Oracle squeezing the MySQL lemon too hard?

If it hoards functionality, it could lose the community

Open ... and Shut Despite what many feared, Oracle has not abandoned development of MySQL. Indeed, as announced at Oracle OpenWorld this week, Oracle just released MySQL Release Candidate 5.6 with a host of new features.

Unfortunately, only paying customers are ever going to see the best of those features.

Well before Oracle acquired Sun (which owned MySQL), MySQL had developed an Enterprise product designed to turn some of MySQL's broad community adoption into revenue. According to a rising chorus of MySQL community members, however, Oracle has kicked this business strategy into overdrive, hoarding an ever-expanding array of functionality for its paying customers.

It's perhaps not surprising that Oracle would kick MySQL Enterprise into overdrive. Oracle isn't a charity, after all, and has a long history of making money by selling licensed software, along with pricey services and maintenance contracts to support that software. So when the open-source world offered questionable business strategies, it acted.

The problem with this strategy is that by stressing monetisation over community adoption, Oracle may be leaving itself with a far smaller MySQL pie to monetise. Successful open-source businesses depend upon a healthy, growing community. Take that away, and the business evaporates.

This is particularly troubling since some of the functionality that Oracle is hoarding, including performance and scalability enhancements, are already "standard issue" with MySQL's newest headache, NoSQL. PostgreSQL is also seeking to fill the MySQL community void, gaining a number of new acolytes.

The MySQL community was already suspicious of Oracle's stewardship, as research from The 451 Group indicates, resulting in lower predicted usage of the open-source database: 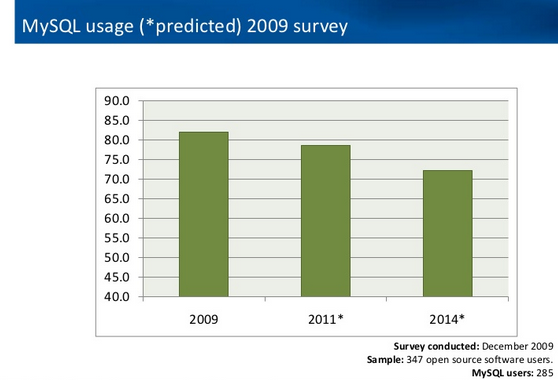 A number of MySQL off-shoots has resulted, including MariaDB, Percona, SkySQL, and others. And while open source guru Dave Neary dismisses this as a problem ("I still see lots of MySQL - sometimes (on Debian) it's called MariaDB, but it's still the same database & toolset"), Oracle would almost certainly beg to differ.

Interest in MySQL has been in serious decline for years, and the relative proportion of jobs available for those with MySQL skills versus, say, Hadoop, should be worrying to Oracle.

There are a number of factors at play, of course, and Oracle is only one of them. For example, there was bound to be a shift away from MySQL as its primary customer base - web startups - discovered the NoSQL world. But a significant share of the blame can appropriately be heaped on Oracle's shoulders. The company, unused to managing open-source communities, seems to have squeezed the MySQL community too hard. And now it's paying the price, or soon will.

MySQL's revenues may be a rounding error for Oracle, but given its stewardship of the open-source database, that's all they will ever be. ®