The “light sail” – a spacecraft powered by the pressure of photons streaming from a handy star – might still be science fiction, but researchers in the US have demonstrated that photons can flip switches at the nano scale.

The University of Minnesota research published in Nature Communications (abstract here) describes a nano-technology that creates relays controlled by light instead of electricity. 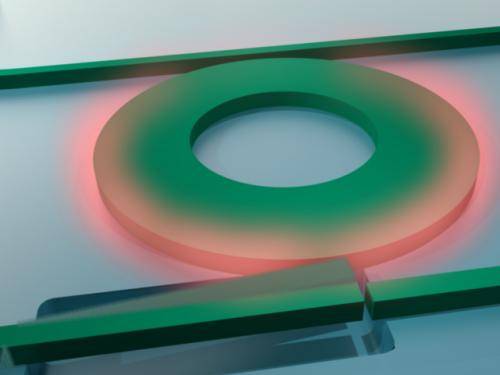 Since a small control signal of light can be used to switch a larger light signal on and off, the nano-relay can act as an all-optical amplifier that works without converting the optical signal into electricity, and without relying on non-linear materials (another key research field seeking the “all-optical” holy grail).

The researchers’ device comprises a pair of optical waveguides and a tiny toroid to act as a resonator in which light can gain intensity, an amplification that allows a weaker signal from the first waveguide to generate a strong optical force on the second waveguide, causing it to resonate and alter the transmission of the second signal.

While “cavity optomechanics” is a hot field for research, the University of Minnesota scientists, led by Mo Li, say their device is the first to achieve a significant non-linear behavior (ie, amplification) with a broad bandwidth.

As they state in the article’s abstract, “current implementation[s] of cavity optomechanics achieves both excitation and detection only in a narrow band of cavity resonance,” – hindering the technology’s usefulness in broadband systems. Li’s work has resulted in a broadband system that can be implemented at a chip scale.

By overcoming that bandwidth limitation, the researchers say their device is suitable for the wavelength-multiplexed systems in use in carrier-scale optical networks. ®